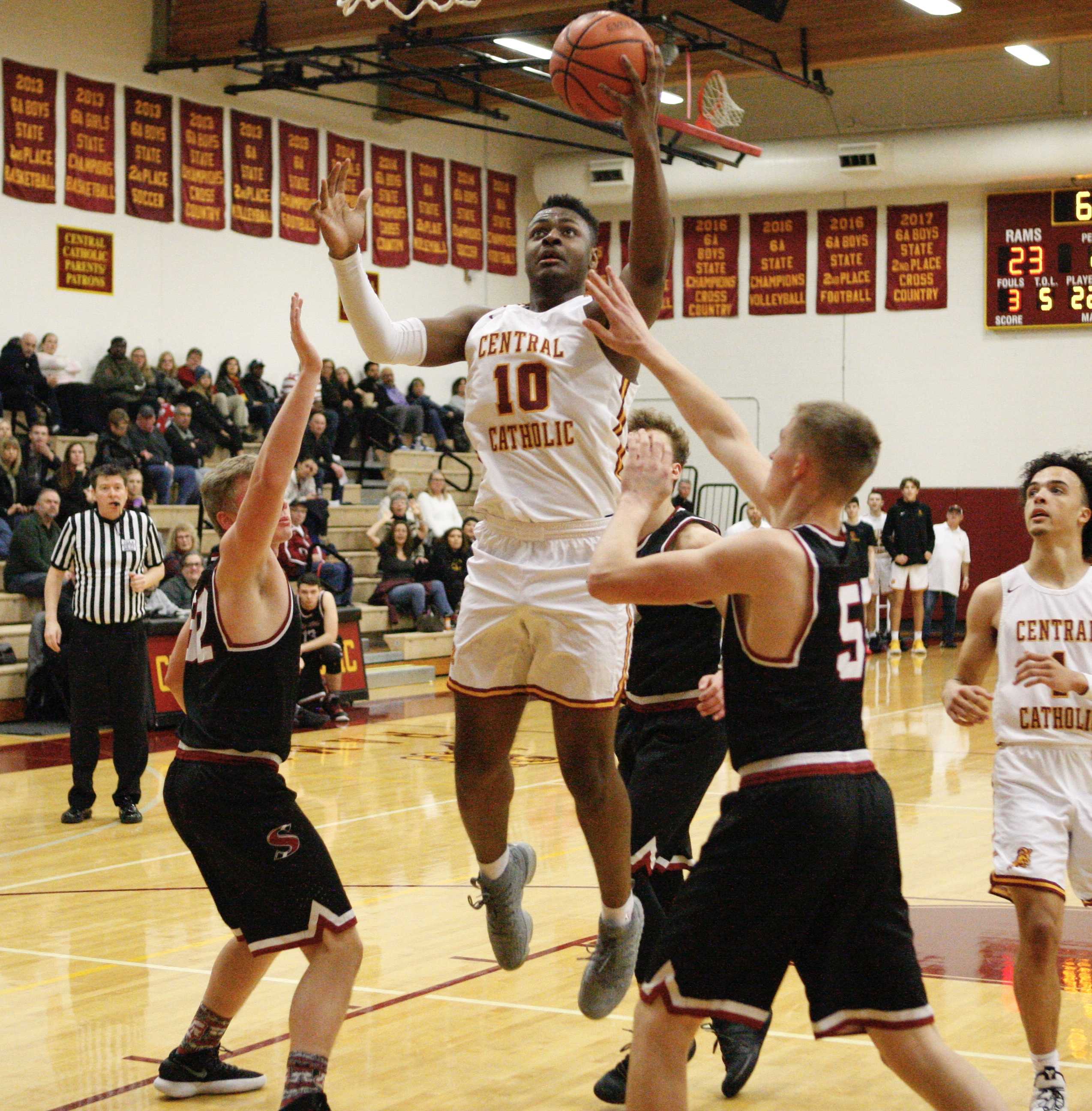 PORTLAND -- Nobody in the Mount Hood Conference boys basketball race — or maybe even the state — was more ready for an easy victory Tuesday night than Central Catholic.

By the time Sandy showed up at the Central gym, the Rams had survived, uh, heck week. Fourth-ranked Central marched through a stretch of four games that included a double-overtime win against big, bad Barlow then three straight roadies — with another overtimer against Clackamas and two other victories by three and 10 points.

So Tuesday’s 90-41 blowout of a respectable —seriously — Pioneer team came as a welcome surprise. The last time the two teams squared off, on Jan. 23, the Rams had to scratch hard to escape mountain country with a five-point win.

“Coming off that two-overtime game against Barlow,” Rams coach David Blue said, “and just as difficult were three straight road games against well coached teams, this was nice.

“We were able to get home and regroup and stick to the game plan.”

And after all of that, Central Catholic (17-5) is still perfect and all by itself at the top of the MHC standings at 12-0. Tuesday’s victory clinched at least a tie for the championship with Barlow; given that the Rams’ last two games of the regular season are against teams that they’ve already beaten by 40 points, the race is all but mathematically over.

And if that’s a fact, it’s also true that the race probably ended in the first few minutes of the Rams’ win against Sandy. Central jumped out to a 13-3 lead in the first 4:27 of the first quarter and finished the first period up 20-6.

Sandy, which started the night at 14-7 and in a solid third place in the MHC at 7-4, got to the tipoff on time. But the Rams beat them to everything else.

Blue was quick to defend the Pioneers.

“Sandy is a really good team,” he said. “As I understand it they missed a couple of practice days because of the snow they had up there, and that’s tough.”

Then again, Blue’s Rams were clicking right out of the locker room. All but point guard Isaiah Amato got on the scoreboard in the first big Central burst, and he assisted on three of the four scores. He got his first basket with a buzzer-beating three-pointer at the end of the first period.

It was the first of 11 Central Catholic three-pointers. The Rams also got a layup just about any time they wanted one, and had three authoritative slams dunks.

Central opened the second period with a 16-3 run that put the Rams up 36-11. They roared off on an uninterrupted 13-point explosion for a 66-27 lead in the third, then ran the whole left side of their bench in for most of the fourth quarter. All the subs did was start the period with a 14-point run of their own that made it 83-32 with 4:37 left.

“It was nice,” Blue said of his bench, “to be able to give them some time. We don’t get to do that often.”

All but two Rams got into the scorebook, including five who hit double figures: Darius Gakwasi (19), SataieVior Ayilola (17, including two of the slams), Amato (16) DeRay Seamster (14) and substitute Luke Johnson (10).

Amato, who directed the traffic for the Rams, agreed that it was fun to have a pressure-free victory.

“It was a lot of fun,” he said. “Everybody was moving the ball, knocking down the shots and hitting people with passes. And there was a lot of energy off the bench.”

The Rams played a murderous schedule at the beginning of the year, and may be reaping the benefit of it now, at the end of the season. They lost three in a row to powerhouses from Jefferson, Jesuit and West Linn in December, but they also knocked off current No. 1 Lake Oswego, Metro League threat Sunset and Grant in the same month.

“That helped us fight through adversity,” Amato said of the December schedule. “Especially a couple of overtime games, one where we were down 10 with two minutes to go. It all helps.

“It also helps our skills playing against those kind of teams.”

Added Blue: “We went through a tough pre-season on purpose. We’ll find out if that pays off in the playoffs.

“The guys are going a lot of things well now, and I’m really proud of them.”