Girls soccer: 4A champ Woodburn 'up for challenge' of 5A
Tweet
The senior-laden Bulldogs, winners of two of the last three 4A titles, return to the 5A Mid-Willamette Conference this season
August 18, 2022 by Jerry Ulmer, OSAAtoday 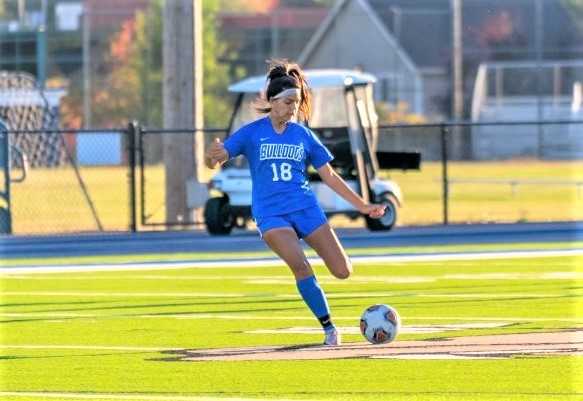 Three years ago, a freshman-dominated Woodburn girls soccer team shocked the state by winning the 4A championship, a first for the program.

Now, coming off a second 4A title in three seasons, the senior-laden Bulldogs are relishing the opportunity to prove themselves on another level as they move back up to the 5A Mid-Willamette Conference.

“In 2019, that was kind of our motto, that people were going to underestimate us, so let's go in and show them what we're capable of,” coach Andrea Whiteman said. “This team, especially this group of seniors, they don't really get discouraged. They're always up for the challenge.”

Woodburn moved from the Mid-Willamette to the 4A Oregon West Conference in 2018-19 when the school's entire athletic program met the criteria to drop down one classification. Whiteman said her players were ready to move back to 5A last fall, when Woodburn's powerhouse boys team made the jump.

“They were real excited when they heard we were moving up this year,” Whiteman said. “I think it's the perfect time and it's the perfect group of athletes to be able to take on the challenge.”

As requested by Whiteman, they played a Mid-Willamette schedule and went 4-2-2, dropping one-goal decisions to Crescent Valley and West Albany and tying Silverton and Corvallis. In their two nonleague games, they lost by one goal to 4A teams Philomath and North Marion.

Considering other factors, their record was a bit misleading.

“We had a lot of people sick, so it was kind of inconsistent with who we had,” Whiteman said. “We had some players who didn't come out that season.”

Last season, Woodburn rebounded to go 13-0-4 overall and 9-0-3 in the 4A Oregon West. The Bulldogs gave up only one goal in four playoff matches and surrendered nine goals for the season. All but two players from that team are eligible to return, including seven seniors who were starters as freshmen.

One key loss, however, is center midfielder Myranda Marquez, the 4A player of the year who scored 23 of the team's 54 goals last season. Without Marquez, now playing at Chemeketa Community College, Woodburn's attack will look different.

“It's always amazing to have someone like Myranda, who's such a superstar, but then it ends up where people think they always have to play through her,” Whiteman said. “I found sometimes when you remove that, it causes the team to have to play more like a team, or really use each other.

“I'm not sure one person will step into her role, but rather we'll two or three solid center midfielders who are kind of owning the space together and can distribute the weight of that responsibility.”

Seniors Luz Rojas and Thalia Monroy and juniors Julissa Rios and Elzabeth Valdez Vasquez will have to step up their game in the midfield to make up for Marquez's absence. Rojas, who had nine goals and six assists as an Oregon West first-team pick last year, is ready to have a big season.

“She can play in the middle or the outside,” Whiteman said. “She's just as deadly in either spot.”

The Bulldogs are loaded with year-round club experience, many of them playing together for years on Woodburn FC. Senior goalkeeper Litzy Gonzalez, senior center back Caitlynn Spencer and Valdez Vasquez recently returned from playing in Spain with Portland-based Albion SC.

“They really embody being a soccer player,” Whiteman said. “That's their identity. They live and breathe it.”

Woodburn will play a tough nonleague schedule that includes a home match against 6A power Jesuit on Aug. 30 and a road game at reigning 5A champion Wilsonville on Sept. 13.

“If we want to be the best, we've got to play the best,” Whiteman said. “They're never really scared of anyone because they know how hard they work and what they're capable of."