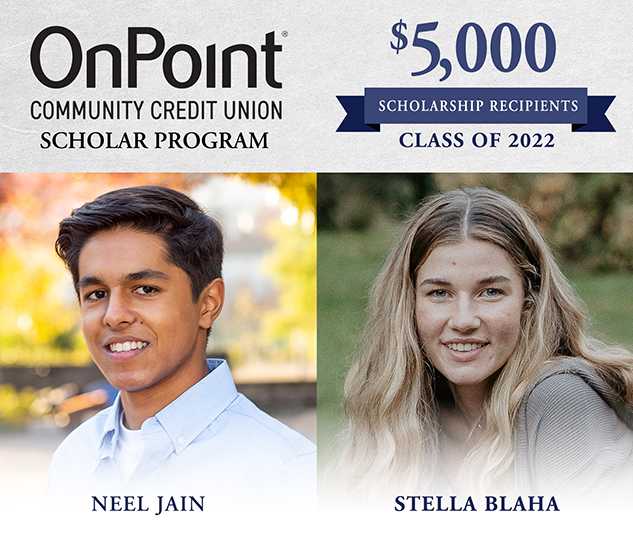 “Oregon’s Class of 2022 faced a year of great obstacles and came out the other side even stronger. This outstanding group of students returned to in-person learning and a full slate of activities without missing a beat, showing a level of adaptability and perseverance that will serve them well in the future,” said Rob Stuart, President and Chief Executive Officer of OnPoint Community Credit Union. “We are proud to partner with the OSAA to honor exceptional students for their hard work, dedication and spirit. This year’s winners inspire us all, and we look forward to seeing them continue to make a difference in their communities.”

OnPoint’s Scholar Program honors graduating Oregon high school seniors who have earned a 3.50 or higher unweighted cumulative grade point average, and have earned a varsity letter in an OSAA-sanctioned sport or competed in an OSAA-sanctioned activity. Winners were selected based on letters of recommendation and personal essays that described their community leadership, classroom success, and how participating in OSAA activities helped them achieve their goals.

“I commend our 2022 scholars for staying committed to their studies and finding ways to give back to their local communities,” said Peter Weber, OSAA Executive Director. “We’re excited to recognize their accomplishments and grateful to OnPoint for partnering with us to honor some of Oregon’s finest high school seniors.”

Stella Blaha of Cleveland High School maintained a perfect academic record in the rigorous International Baccalaureate Diploma program and led her varsity volleyball and basketball teams while grieving the loss of her mother to brain cancer. Her grit inspired Blaha’s basketball coach to create the Stella Blaha Athlete of Character Award, an award that will be given to an athlete each year in her name.

After rival fans sexually harassed her and her volleyball teammates during a match, Blaha successfully advocated for more support from administrators, and her team members agreed to refuse to play if they were sexually harassed.

“I had never considered forfeit as an option; however, my responsibility as a captain showed me that confronting the sexism female athletes face takes precedence over wins and losses,” Blaha said.

As a student in Cleveland’s Mandarin Immersion Program, Blaha voluntarily tutored young students in the program during the pandemic. As a member of the speech and debate team, Blaha mentored novice speakers and debaters. She will attend the University of California, Los Angeles.

“PDX Concierge isn’t just a grocery delivery service,” said Jain. “It’s a community built on mutual trust and support, a fulfilling experience for both our teenage volunteers and our elderly clients.”

Selected to serve on the Beaverton School District Superintendent’s Advisory Council, Jain successfully advocated to create a wellness room at Westview to support students’ mental health. He also served as a volunteer soccer coach, vice-chair to the Beaverton Mayor’s Youth Advisory Board, a youth liaison for the Beaverton Committee on Aging, and volunteered at an orphanage over his winter break in India.

Along with playing varsity soccer, Jain maintained a 4.0 unweighted and 4.45 weighted grade-point average and took 10 Advanced Placement courses and other honors coursework. He will attend The Wharton School of the University of Pennsylvania to study business with a focus on social impact and hopes to start his own socially responsible company.

Emme Grisa of Gladstone High School is a social justice and equity advocate, dancer, actor and musician who maintained a nearly perfect grade-point average. Grisa frequently volunteers through Key Club and National Honor Society and helped organize a Day of Silence to raise awareness about discrimination against the LGBTQ+ community. Diagnosed with Hashimoto’s disease, an autoimmune disorder that impacts how the brain processes information, Grisa has continued to perform well academically. A member of the choir and band, Grisa plans to continue playing the trumpet at the University of Oregon, where she will major in music with a goal of becoming a session player and musician for movies, television and video games.

Jackson Lopiano of St. Mary’s School in Medford supported families whose homes were destroyed by the Almeda Fire with Thanksgiving food baskets and clothing donations, and by building Little Free Pantry locations at community churches. Lopiano funded his projects by selling his family’s unneeded clothing online. Lopiano earned a 4.07 cumulative grade-point average while playing tennis for St. Mary’s, taking over a dozen Advanced Placement classes and a college-level multivariate calculus class. Lopiano will attend The Wharton School of the University of Pennsylvania.

William Seggerman of Pine Eagle High School earned his spot as valedictorian of his class by making the honor roll seven consecutive semesters while taking 14 college-level classes and earning nearly 50 college credits. Captain of his high school’s football team, Seggerman also wrestled and participated in Future Farmers of America, band, speech and class leadership activities. For his senior project, Seggerman organized and led volunteers to clean and maintain the 10-mile Lake Fork Trail in the Wallowa Whitman National Forest. Seggerman plans to attend the University of Idaho and major in Wildlife and Fishery Biology.

Johanna Peeters Weem of Forest Grove High School led her friends to establish the Forest Grove Mayor’s Youth Advisory Council to encourage young people to participate in civic life. As chair of the council, she put her passion for politics to work by proposing legislation to promote citizen engagement, equity and environmental impact. Peeters Weem has taken 16 Advanced Placement classes, earning straight A’s while swimming and running track for her high school. Peeters Weem says she excels “in the distances that are so long no one else wants to do them, because I’ve developed a skill in keeping going when the going gets tough.” She plans to pursue a degree in Environmental Engineering at Oregon State University.

All graduating seniors in the Scholar Program were eligible to apply for a scholarship. The Scholar Program is part of OnPoint’s partnership with OSAA as the title sponsor of the Oregon high school state championships. Visit onpointcu.com/community-giving to learn more about OnPoint’s support of local organizations like OSAA.

ABOUT THE OREGON SCHOOL ACTIVITIES ASSOCIATION