Baseball Notebook: May 19
Tweet
Every other week during the spring season, we’ll talk some Oregon high school baseball. This is the place!
May 19, 2022 by John Tawa, OSAAtoday 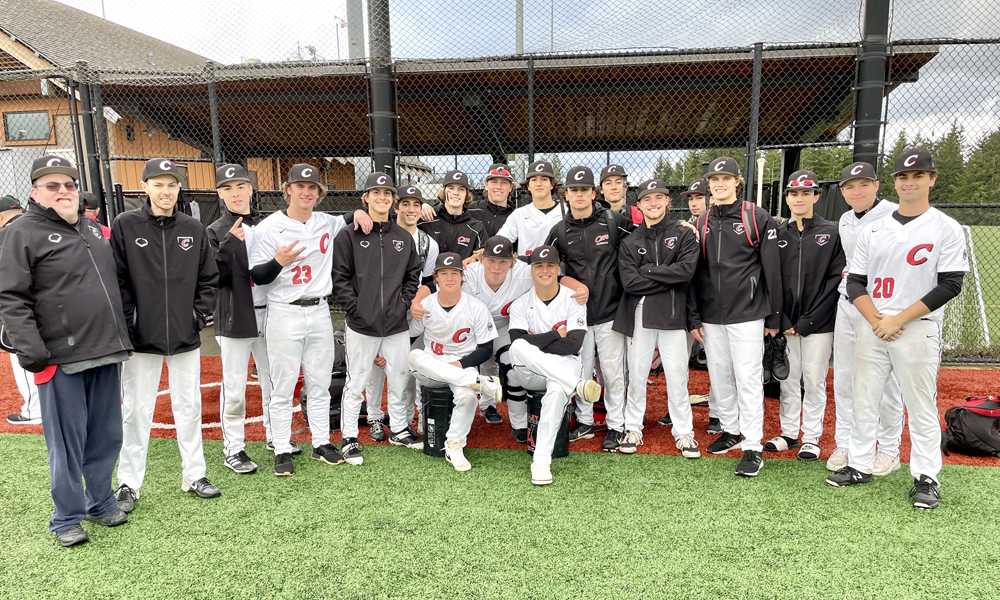 Freshman Tyler Petrasek singled to left center field to score Jeff Tompkins to walk it off in the 8th inning of Amity's 3-2 victory over Horizon Christian on May 3…West Linn senior Spencer Sullivan hit a home run in the 11th inning on Monday to walk off a 2-1 win over Tigard…Hood River Valley defeated Gresham, 7-2, on Monday behind sophomore lefty Jordan Webber, struck out 10 over 4.1 innings, including seven in a row at one point….In the same game, Mason Spellecy  had a single, double and triple and drove in five. Spellecy, a senior, now has 35 driven in despite missing time with a hamstring issue earlier in the year…

Cordell Prevett gave up just three hits and a lone run on the mound while Carter Northrop, Jeff Tompkins and Evan Berkey combined for 8 hits, 6 runs, and 6 RBIs to lead the way for Amity in a 14-1 victory over Westside Christian on May 10…McMinnville clinched the Pacific Conference Title last Friday with an extra inning win over Century (I walked by that game on my way to see the Hillsboro Hops!). McMinnville’s 17-1 league record is one better than Sherwood…Lincoln was down 6-0 to rival Grant in the bottom of the seventh and scored nine times to win, capped by Colton Schmokel’s three-run, walk-off homer. The loss was the only one in the PIL for Grant…

Central Catholic senior SS Thomas Ferroggiaro hit for the cycle against Reynolds on May 5. He went 4-for-5 with four RBIs in the 9-0 win…As of May 8, Ferroggiaro was batting .423 with 11 doubles, three triples two home runs, 28 runs and 28 driven in across 23 games…Central Catholic closed the regular season on a 15-game winning streak…Down 6-1 in the bottom of the 7th on May 13, Amity scored six runs to defeat Harrisburg, 7-6. Miliano Huynh highlighted the come back with a two-run double in the last gasp rally.

Tualatin beat Sherwood, 3-2, in 8 innings on May 10, on a walk-off single by Aidan Howard, which scored Caleb Kreitzer from second. Ryan Morrison threw seven strong innings, giving up just six hits and a walk while fanning seven…Clackamas senior Jackson Jaha threw a 5-inning perfect game on May 6 in the Cavaliers’ 16-0 win over Nelson. Jaha also went 3-for-4 at the plate with three doubles and two RBIs….Clackamas won the Mt. Hood Conference title with a 15-1 record… Portland Christian  senior Kirk Mazurowski had a dream double header on Monday in two one-run losses to Nestucca. He went 7-for-8 with three doubles, four runs scored and seven RBIs…

In this space, and the ones below, we have recurring categories that will appear in every baseball notebook for the rest of the season. Varsity coaches may add to these categories by email to [email protected].

Here, we will recognize those Oregonians who have gone yard five or more times so far this season. We will add to it in subsequent Baseball Notebooks as coaches tell us about the players who are dinger ringers.

Here, we recognize those Oregon hurlers who hit 85 mph or higher when they get on the bump.

In this space, we recognize Oregon baseball players who have 25 or more stolen bases at this point in the season, based on the information we have received.

This list recognizes those pitchers who have fanned 70 or more batters this season.

In this space, we recognize hitters who have put up outrageous stat lines in a single game.

Mason Spellecy, senior SS, Hood River Valley – 3-3 with a single, double, triple, and 5 RBIs in May 16 win over Gresham.

Jackson Miller, senior OF, Ida B. Wells – 4-5 with a double, HR, four RBIs and three runs scored in March 21 win over Mead of Colorado.

Ashton MacClanathan, senior 2B, Clackamas – 2-3, with a double, HR, run scored and six RBIs in April 26 win over Gresham.

Below, we recognize pitchers who have thrown seven-inning no-hitters this year.

Below, we recognize those hitters who, with a minimum of 50 plate appearances, are hitting .500 or better on the season.

In this space, we list those players, in the current senior class and younger, who have signed National Letters of Intent in baseball or have made a commitment to attend a college or university of their choice. Congrats! It can be so demanding but at the same time is so rewarding.

Here’s whom we have so far. The list is over 60 strong!! It is a golden age for Oregon prep baseball! We will add to this list in subsequent notebooks as we receive notifications.

If you are a HS coach and want to add someone to the list, by all means email me, [email protected], put “baseball commitment” in the subject line and provide the info in the manner shown above.