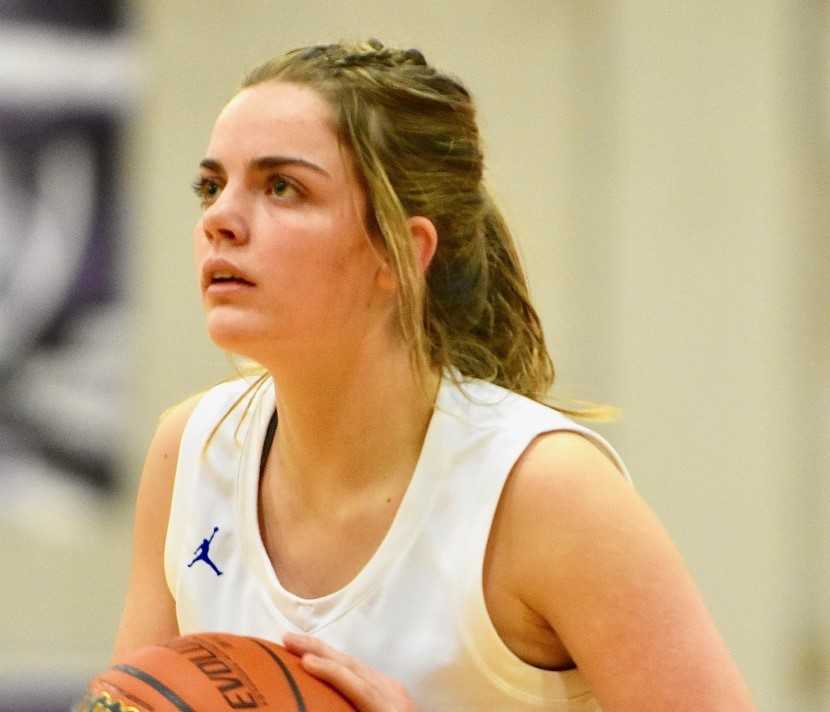 Crane's Dani Clark scored all 14 of her points during a 23-0 run in the second quarter. (Lisa Britton/Baker City Herald)

BAKER – The referees surprised Crane senior Dani Clark by telling her to take off the black sleeve wrapped around her left arm.

It might have been the Mustangs’ best assist during the final of the OSAA/OnPoint Community Credit Union 1A girls basketball final Saturday night between the top-seeded Mustangs and No. 3 Damascus Christian at Baker High School.

The left-handed Clark, who started wearing the sleeve after having surgery on her elbow, returned to the court without the sleeve.

Sleeveless, Clark made four three-pointers during a 23-0 Crane run that spanned most of the second quarter and propelled the Mustangs to a 56-47 win.

The official 2021 tourney was canceled, but Crane went 13-0 during the abbreviated season and won a 16-team state tournament, also at Baker High School, by defeating Country Christian 75-54 in the final.

And now the Mustangs have another championship trophy.

As Crane fans congregated on the court in the Baker gym to celebrate the win over Damascus Christian on Saturday night, coach Stub Travis said the Mustangs’ three-year run — a 72-1 record — has been accomplished despite changes in the roster each year.

“Our kids have great heart and they’re great athletes,” said Travis, who also led Crane to the title in 2004. “I’m really proud of this group.”

Saturday’s win over Damascus Christian brought Crane more than a championship. The victory also avenged the only blemish on the Mustangs’ record since 2019 — a 54-53 loss to Damascus Christian at a tournament in Burns three months ago.

Saturday’s championship game looked to be just as competitive early.

After the Eagles took a 9-3 lead on Rasmussen’s rebound basket, Crane scored the final six points of the first quarter to forge a 9-9 tie at the break.

Rasmussen made a short jumper early in the second quarter to give Damascus Christian a 13-11 lead.

It was their last.

Clark made consecutive three-pointers in a 33-second span to give Crane a 17-13 lead.

But the Mustangs were just getting started.

Crane then forced two straight turnovers, which Kortney Doman – the Mustangs’ poised sophomore point guard -- converted into one free throw and a layin to boost the lead to 23-13.

Taylor Joyce and Clark each made a three-pointer, Leslie Doman hit a 15-footer and Clark capped the game-changing surge with her fourth three-pointer with 46 seconds left in the first half.

“It wasn’t a fluke that we shot like that,” he said. “We have four guards that can shoot like that on a given night.”

Clark said that although it was “pretty weird” to have to remove her sleeve, it didn’t affect her shooting.

“After the first shot went in I just got into a rhythm,” she said.

Damascus Christian’s Emily Powers was fouled on a three-point try and made two of three shots to cut the halftime lead to 34-15.

The Eagles got within 10 points, at 40-30, late in the third quarter, but Crane scored the final seven points of the quarter — five by Kortney Doman — to push the lead back to 17 entering the final period.

Damascus Christian made three three-pointers late in the game — two by Sierra Hale — to get as close as 52-45 with 55 seconds left, but the Mustangs made enough free throws to thwart the comeback bid.

During the final minutes the Mustang fans chanted “we want Kelsie,” a reference to Crane senior Kelsie Siegner.

Siegner, the 1A player of the year as a sophomore in leading the Mustangs to the state title with 25 points in the championship game, injured her knee in the fourth quarter of the final game of the June 2021 tournament and wasn't able to play this season.

Siegner – who made a late cameo in the quarterfinals, making a basket – subbed in during the final 30 seconds Saturday. She was fouled and swished two free throws with 11.8 seconds.

“I loved it,” Travis said of watching Siegner score the final points of her high school career.