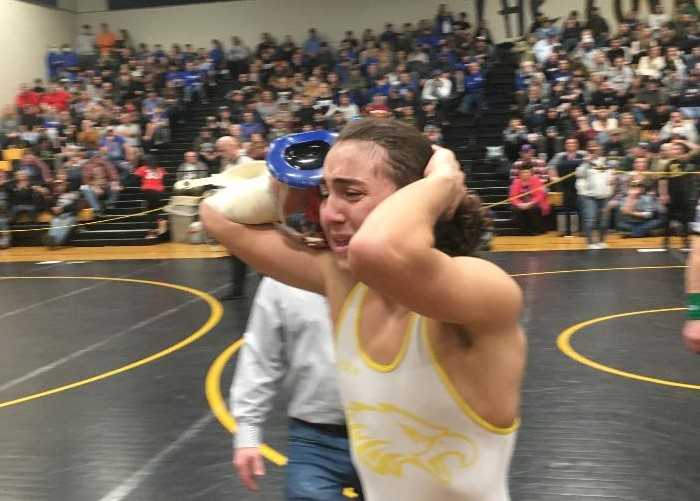 TURNER – As a freshman wrestler at Cascade in 2019, Mauro Michel started to think big when coach Jason Lovell told him he could be the school's first four-time state champion.

“That was the one goal I took to heart, no matter what,” Michel said.

Saturday night in the OSAA/OnPoint Community Credit Union 4A wrestling championships at Cascade, Michel's goal came to fruition, even if his career didn't play out exactly as anticipated.

After winning two titles for Cascade, Michel transferred to Stayton – where his brothers wrestled for the Eagles – and added two more championships. He joined an elite fraternity Saturday when he pinned all four of his opponents, taking out Banks senior Dylan Smith in 33 seconds in the 138-pound final in his former home gym.

An emotional Michel said he drew on the strength of his teammates, who raised him up on their shoulders in celebration.

“They've always been family to me, every single one,” Michel said. “Even if they're not blood, these guys mean so much to me. Seeing them here after I did something very big – just for my family and my schools in general – I'm just happy. It's one of the best days of my life.”

Michel, who has not lost since his freshman year, went 45-0 this season to extend his winning streak to 118 matches. He went 160-4 in his career, with three losses coming against Crescent Valley's Gabe Whisenhunt and one to West Linn's Ricky Bell.

Before Michel transferred to Stayton, the Eagles' last state champion was in 1993, when assistant coach Travis King won a title.

“It's been fun having him,” Stayton coach Stuart Peterson said of Michel. “He grew up in Stayton, and it was nice to have him back and carry out that legacy that his brothers brought through. It's great for him to have that as a memory now.”

“He has fun,” Peterson said. “And he's got that cradle. He can hit it from anywhere on the mat at any time.”

“This team was just amazing,” Braden Carson said. “We really had good cohesion. We stuck together really well on the trips. We encouraged each other. Those younger guys really pushed me in the mat room.”

Braden Carson won his third consecutive title by defeating Baker/Powder Valley senior Gavin Stone 10-0 in the final. He finished the season with a 39-1 record.

“Being in the state finals, there's nerves, and I just went out there and I knew I was going to do good,” Braden Carson said. “I knew my best was going to be a little bit better than his best.”

Having his brother also win a title made the night that much sweeter for Braden Carson.

“He's a stud. Way better than me when I was a sophomore,” Braden said of Kai. “I'm just super proud of him.”

They are the sons of La Grande coach Klel Carson.

“It's been a blast coaching them both,” Klel Carson said. “This weekend is like Christmas. I couldn't wait for it to get here and I don't want it to end.”

The Carsons weren't the only brothers to win titles, though. Sweet Home junior Jacob Sieminski (126) and sophomore Kyle Sieminski (106) were two of the Huskies' four individual champions, the others being freshman Jacob Landtroop (113) and senior Colby Gazeley (220).

It marked the second year in a row that the Sieminskis won titles together.

“It was just as cool as last year,” Jacob Sieminski said. “Still nerve-racking, though.”

Jacob Sieminski defeated Philomath senior Blake Niemann 16-0 to get payback for when Niemann pinned him in the regional final two weeks earlier. That was his first-ever loss to Niemann.

“It was the second time I've gotten pinned in the last five years that I remember,” Jacob Sieminski said. “So it was definitely difficult to come back from that. … But it was worth it in the end.”

Crescent Valley came back to win its fourth consecutive 5A championship in a packed Ridgeview gym Saturday night.

The Raiders were led by four-time state champs Gabe Whisenhunt (126) and James Rowley (182).

"Four state titles, four team titles," Rowley said. "Gabe and I starting from the bottom as little freshmen, now leaders of the team as seniors. This fourth one means a lot. Hope people had fun watching. Enjoyed the show, too."

Other Raiders winning titles were sophomore Everest Sutton (106), juniors DJ Gillett (132), Daschle Lamer (170) and Hayden Walters (195) and senior Riley Godek (285). Gillett, Lamer and Walters each won their third titles. It was the second title for Sutton.

Crook County held a slight lead entering the finals but the Raiders proved to be solid late in the tournament, ending with 241 points. Crook County (210.5), Thurston (208.5) and Redmond (152) were next.

“We have numbers for our guys on the back-side to keep making points up for us,” Chad Lamer said “So after the semifinals, it really helped for us gain a lot of points, and keeps us in the lead.”

“I think we had a chance. Some of the guys needed to score some more points,” Crook County coach Jake Gonzales said. “Crescent Valley is tough and it is good to address that tough competition, so overall it was a good tournament.”

Gonzales was honored with coach of the year at the tournament.

“It really goes to the kids. They are the ones competing,” Gonzales said.

The change in format and venue gave the event a different feel than a traditional state tournament, according to Chad Lamer.

“Only having to make weight once is weird,” Lamer said. “But it was still a good environment. It’s nice when people can get close to the mat. It’s really loud in this gym which makes things exciting too.”

Host La Pine got titles from senior Dylan Mann (138) and freshmen Landyn Philpott (120) and Devon Kerr (132) to win its third title in four seasons in the 3A tournament Saturday night.

Dayton senior Tony Cisneros (145) grabbed his second title in a row and completed a 27-0 season by pinning Burns senior Kevin Peasley, last year's champion at 145, in the third round.

South Umpqua senior Caj Simmons capped a 24-0 season with a title at 195. Nyssa senior Alec Carey (182) pulled out a 3-2 decision in the final over Dayton senior David Bowlin, the champion at 182 last year.

Of all the team's titles, though, this is the first one the Bulldogs have won in their home gym.

“It felt great having my whole family here to cheer me on,” said Culver senior Noel Navarro, the champion at 120. He added that “there was a whole different energy being in front of my home fans.”

Navarro pinned his way through the bracket to win his first title. Culver's other champions were senior Isaiah Toomey (160) and juniors Kelin Abbas (145) and Wylie Johnson (285).

“It was indescribable, feeling the crowd and my teammates roar when I won the title,” Toomey said. “It felt really good knowing I accomplished my goal I'd had my whole high school career.”

“We try to make everyone feel special and unique,” Alley said. “Some of these kids may not have even been born when we won our first in 2007.”

The Butner brothers of Pine Eagle finished off impressive seasons with wins in the finals. Senior Coy Butner (132) won his first title with a 7-2 decision over Reedsport senior Aaron Solomon, last year's champion at 132. Senior Chase Butner (138) collected his third championship by outlasting Culver's Arsenault 11-8 in the final.

Coy and Chase finished with season records of 31-1 and 29-1, respectively.