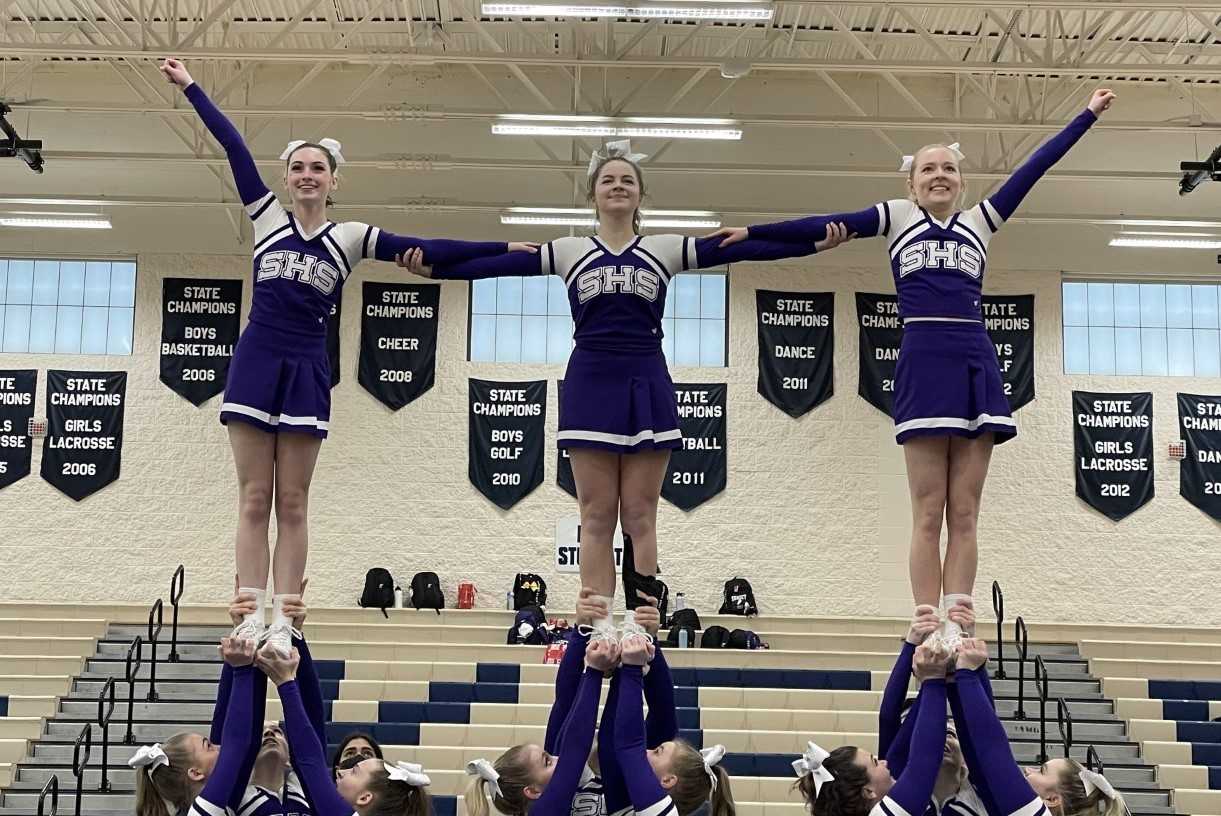 Sunset competes at the Laker Rumble in January.

The OSAA cheerleading championships are Saturday at Oregon City High School, and after spending last season competing virtually, teams are ready to take the mat to contend for the title.

With the consistent struggles presented this year and a quick turnaround to the start of the season, our coaches and cheerleaders had a huge undertaking to make it this far. We praise all teams for their dedication, passion and love for this sport.

The 3A/2A/1A division is sure to be a fun one to watch. With former champions including Rainier, Central Linn, Santiam Christian, and Delphian in the mix, it is sure to be a fight to the finish.

The remaining field of Scio, Cascade Christian, Sheridan, and Yamhill-Carlton, all former trophy winners, look to be in the hunt as well. Season results in this division have seen Rainier, Santiam Christian, and Scio winning, but the Cobras of Central Linn have been right in there with a string of second-place finishes. The top four finishers will earn a trophy, and tenths of a point could decide the top spot.

The 4A division is the smallest of the day, but it packs a punch. With two of the strongest programs in the state, Gladstone and Sweet Home, competing, it will be a memorable showdown between the friendly rivals.

Ontario and Cottage Grove are two former trophy winners and will be looking for their opportunity to crack into the top three. Molalla is set to compete and fight for its spot among the five competing teams. This small but mighty division is sure to be entertaining.

The 5A division is the largest it's been in recent history. With many teams returning to the 5A division from co-ed, the division has grown, and the talent level is high. Lebanon, Ridgeview, The Dalles, Crater, South Albany, West Albany and North Bend have all been jockeying for position at the number one spot.

Hillsboro makes its return to competition and looks to make a splash with the top teams. Wilsonville is always on the hunt for a trophy and looks to repeat this success. Corvallis, Crescent Valley, Putnam have returned to the 5A division from coed and are looking strong.

Springfield, a former champion, won't go down without a fight. Pendleton and Dallas are making their state debuts after a long absence from the event, and we are excited to welcome both in their return.

The 6A division usually is one of the toughest divisions of the day, and this year is no exception. With so much congestion at the top, hitting a clean routine will be the name of the game.

Former state champions Newberg, Aloha, David Douglas and Lake Oswego have their eyes on the blue prize. Favorites Lakeridge, Mountainside, Sherwood, West Linn, Oregon City will all be vying for the chance to bring home a coveted trophy.

Impressive newcomer Nelson has found success this season and will be competing at their first state championship as a school. Glencoe, Forest Grove, Liberty, Sunset, Wells, Centennial and Clackamas will all make a great show and hope to move up in the rankings.

The co-ed division is jammed packed with exciting teams and newcomers. This division is sure not to disappoint from small schools to large schools.

Former state champions Westview, Thurston, McMinnville and Tualatin have all had success this season with eyes locked in on the top spot. Roseburg, Redmond, Hood River Valley, South Salem, South Medford and North Medford are all waiting in the wings to swoop in and claim a top-five spot.

Don't sleep on Southridge, North Salem, Milwaukie, Philomath, North Eugene and Marshfield, as all have entertaining routines and they aim to make waves at state. Siuslaw makes its debut in the co-ed division, and the Vikings are looking to build on a solid foundation.