Boys basketball: No. 1 Junction City edges No. 2 Marshfield
Tweet
Kaleb Burnett scores 19 points as the Tigers go on the road to beat the Pirates 43-42, take over first place in Sky-Em League
January 28, 2022 by Staff Writer, OSAAtoday 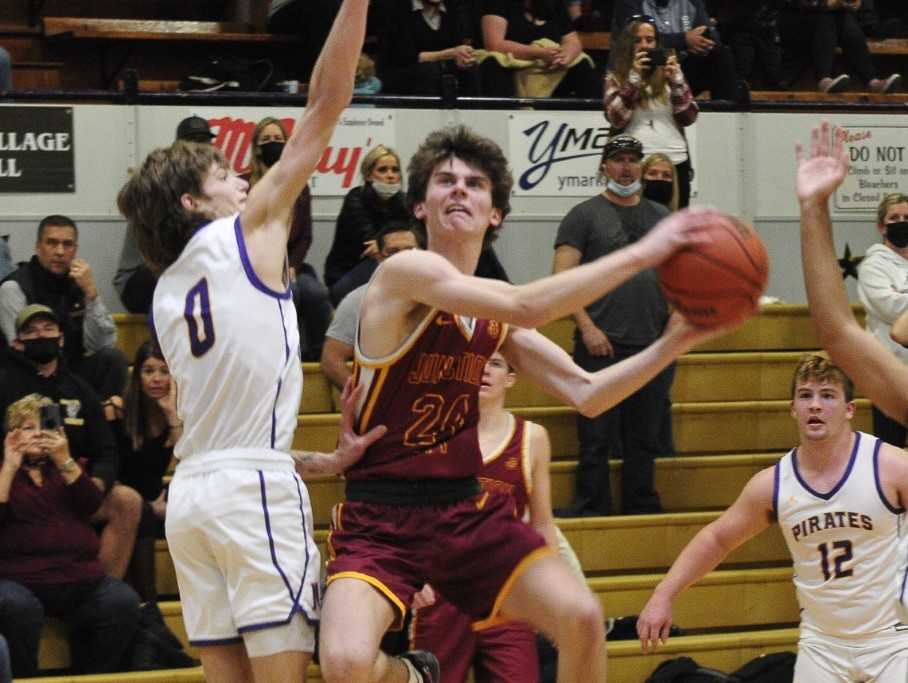 The Tigers, ranked No. 1 in the 4A boys basketball coaches poll, edged the host and No. 2 Pirates 43-42 to take sole possession of the Sky-Em League lead.

“It’s a big win,” Junction City’s Kaleb Burnett said after scoring a game-high 19 points for the Tigers. “It’s a tough place to play. This is definitely big for us.”

The Tigers also beat the Pirates in both of their meetings last year on the way to taking the Sky-Em title. Ultimately, Marshfield won the Elite 8 Showcase event without having to face the Tigers in the postseason after Junction City fell to Woodburn in the quarterfinals.

“We would love to end the year this year where we ended it last year,” Marshfield coach Casey McCord said. “This was a bump in the road. We’ll be back at it tomorrow.”

Junction City improved to 4-0 in league play and 16-2 overall, the losses coming to 5A Redmond (46-42) in Marshfield’s holiday tournament and against Stayton (51-44) both in December. The Tigers now have 10 straight wins.

The Pirates are 4-1 in league and 15-3 overall, their other losses coming to 5A Crescent Valley (75-41) and to Henley (62-56) during the Sky-Em/Skyline crossover event. They had won seven straight before Friday’s setback.

The game was fitting for a matchup between teams ranked No. 1 and No. 2, close all the way.

The Tigers had taken a 28-24 halftime lead on a tip-in at the buzzer by Burnett, but Marshfield came out storming in the third quarter, opening with a 10-1 run.

Junction City weathered that storm, helped by the Tigers’ only 3-pointer of the game, from Chris Ohman, though Marshfield still led by two, 40-38, heading to the final quarter.

The teams combined for only seven points in the final eight minutes.

Burnett had a three-point play for the Tigers and Pierce Davidson hit two free throws for Marshfield.

The score remained 42-41 Marshfield for a few minutes before Colby Evans scored the eventual game-winner for the Tigers on an inside shot with 2:15 to go.

“When we got the lead, I said if we get the ball we’ll spread it out,” Junction City coach Craig Rothenberger said.

And after the Pirates missed, the Tigers did just that, running the clock down to 29 seconds before Marshfield went into foul mode and sent Court Knabe to the line. He missed the front end of a one-and-one opportunity, but Marshfield missed inside at the other end and sent Ohman to the line after he grabbed the rebound.

Ohman, too, missed, but Marshfield’s Mason Ainsworth was off the mark on a long jumper at the buzzer and the Tigers prevailed.

“We got our best free throw shooters to the line,” Rothenberger said. “They both missed.

“Normally we knock down those free throws, but we made the plays we needed.”

Junction City’s defense was strong down the end, especially Ohman, who was tasked with guarding the high-scoring Ainsworth.

“Chris is the best defender in the league, I think, and he’s one of the best I’ve ever coached,” Rothenberger said.

That’s high praise, considering the Junction City mentor is in his 53rd year coaching overall and 42nd with the Tigers.

“It’s not because he’s lightning quick, but he’s smart and gets himself in good position and has good length,” Rothenberger said. “He gets the best guy every game.”

Ainsworth led Marshfield with 16 points, but did not connect on a 3-pointer all night — Marshfield’s only make from behind the arc was by Ezra Waterman in the first quarter. Ainsworth’s points came mostly on crafty drives to the hoop and the majority of Marshfield’s baskets were from inside the paint.

Burnett also got most of his points inside, as did Evans, who finished with 14 points, the disciplined Tigers working the ball around until they got a good look.

“We move the ball around, wait for the defense to break down and get easy shots,” Burnett said.

The Tigers missed a number of those shots, just like Marshfield did on the other end.

“We didn’t have a great game as far as execution, but we did enough,” Rothenberger said.

He said Evans, one of only two seniors who played in the game for the Tigers, had a big impact.

“Colby did a great job inside,” Rothenberger said. “He really was solid.”

Knabe added seven points for the Tigers, while Dom Montiel scored 10 points and Davidson six for the Pirates.

Marshfield’s roster is entirely seniors, and the group has had a bunch of success the past two seasons, the losses to Junction City notwithstanding.

“It was a good game for us to be in,” McCord said. “Obviously, we would have liked to be on the other side of a one-point game.

“I was really proud of their effort. It stings really bad right now. We really look forward to playing them the next time.”

The teams meet on Junction City’s floor to end the regular season Feb. 18.