Wrestling notebook: January 27
Tweet
News and notes from around the state
January 27, 2022 by John Tawa, OSAAtoday 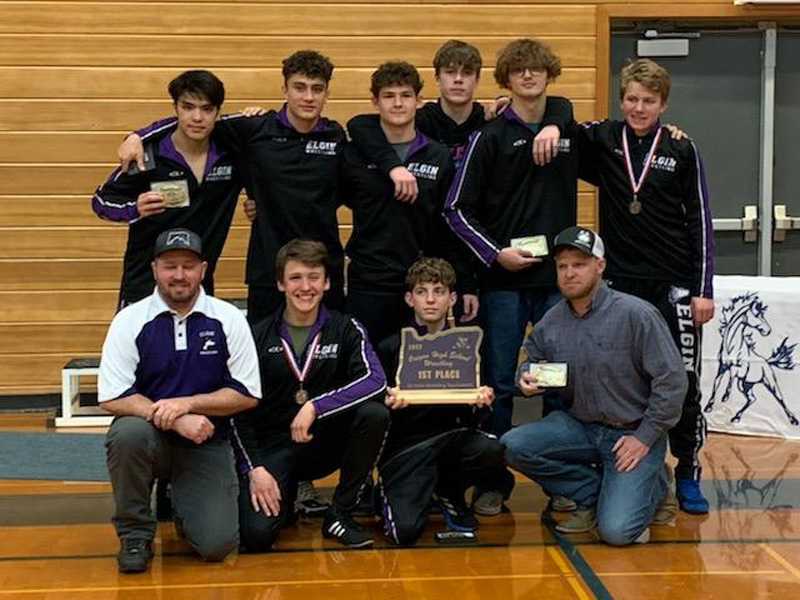 Let’s hear it for the girls!

On Saturday in Dallas, a total of 36 girls teams, some with one wrestler; some with 10 or more like McKay, Sweet Home, North Salem, Hillsboro, Century and Woodburn; convened for a first-of-its-kind event in Oregon: the Dallas Lady Dragon Invitational, a large meet comprised exclusively of girls teams.

More than 300 wrestlers participated in the invitational, which took place one day after St. Helens won Dallas High School’s six-team duals. St. Helens was prominent in the larger event as well, placing second overall, but McKay, with a whopping 22 wrestlers, won the day, amassing 182.5 points to 105 for St. Helens.

Interestingly, the Royal Scots won, and by such a large margin, despite having no individual champion among the 14 weight divisions.  They put several on the podium, led by freshman standout Sarahi Chavez, who finished second at 100 pounds. Track Wrestling reports that Chavez’ record is 26-5, all 26 wins coming by fall.

Thurston, considered the top-ranked girls team in the state after the Colts won the Oregon Wrestling Classic two weeks ago, was absent due to Covid within the program.

Oregon wrestlers were well-represented in the recent national rankings for January, developed by USA Wrestling, Flowrestling and the National Wrestling Hall of Fame. West Linn junior Destiny Rodriguez was ranked 12th in the “pound-for-pound” rankings intended to assess the best of the best nationally and was No. 2 in the 152-pound division.

Seven other Beaver State grapplers were also recognized among the top 25 in each division (plus a few Honorable Mentions): Thurston junior Kaylee Annis, No. 23 in the 106-pound division; Cleveland junior Haley Vann, No. 10 at 117 pounds; Hillsboro senior Ayana Medina, No. 6 in the 122-pound division; Newberg senior Sophia Redwine, No. 23 at 122; Scappoose senior Isabella Amaro, No. 4 at 132 pounds; Vale senior Tyler Richardson, No. 24 in the 138-pound division; and Central Linn senior Anna McDougal, Honorable Mention at 164 pounds.

Five of the ranked Oregonians participated Saturday at the Lady Dragon Invitational. Vann pinned her way through the 120-pound division, including a 17-seond fall. Redwine pinned her way through at 125, Medina did the same at 130 and Rodriguez followed suit at 152 pounds. McDougal was the only ranked wrestler who did not win, but that’s because she faced off against Rodriguez in the 155-pound final.

In a class by itself…

Since 2004, 1A coaches have conducted an “unofficial” 1A state championship in January. This year’s event, conducted Saturday at Crane High School, featured just nine teams, with several unavailable because of Covid or travel challenges.

Elgin won the event, outpacing the host school, 79.5 to 50. The Huskies brought seven wrestlers to Crane and came away with five titles.

Freshman Phoenix Taylor, who weighs in at 90 pounds, won the 106-pound division in a walkover. Sophomores Ty McLaughlin and Gen Wintersteen won at 152 and 160 pounds, respectively. Both recorded falls of 20 seconds or less along the way. Junior Joe Lathrop captured the 170-pound division and Reece McConnell, the lone senior on the squad, won at 145 pounds.

Elgin coach Lee Fincher, who was named 1A Coach of the Year, was thrilled to win, even if the field size was smaller than in years’ past.

“It’s neat for kids to see where they stand against kids just for the schools our size,” he noted.

Cove is a 1A school in a 2A/1A co-op with Union. Cove was eligible to compete at the 1A state championships.

“So, I took my two Cove wrestlers down to Crane for this competition, and David Creech was a winner at 182 pounds,” Shaw said. “Most of the weight classifications were small, but they still wrestled all the kids they could and got awards to the rightful champions!”

One other notable result from the championships: Virginia Tolman of Adrian won the 113-pound division, which consisted of two girls. Tolman won two of the three bouts between the two, both by fall.

Fincher said that numbers are always a problem at Oregon’s smallest schools, with some programs having only 2-3 kids. He started with 17 and is down to 12 due to injuries and attrition. He said that Elgin is fortunate, however, to be deep at the middle weights. For example, Wintersteen is not Elgin’s top wrestler at 160 but still won his division on Saturday.

Fewer numbers at 1A schools mean difficulties finding practice partners. Good practice is a key to improvement, Imbler coach Doug Hislop said. That’s why the 1A schools have trouble competing for hardware at the OSAA state tourney.

Who’s that on the mat?

Imbler brought six wrestlers to the Coaches 1A State Championships and placed fifth overall. Hislop’s wrestlers are all 152 pounds or smaller, except for the heavyweight. As a result, it’s the coach who gets on the mat with the big boy and suffers many aches and pains as a result.

But there’s an additional catch: Hislop is 74 years old!

His teaching and coaching career spans more than 50 years! Hislop has coached youth sports, junior high sports and high school sports. He has been a referee and an educator, a teacher, school principal, school district superintendent and, since 1978, he has been the OSAA wrestling commissioner.

Hislop currently is the interim superintendent/elementary principal, coming back this summer for a one-year term.

And he’s also the practice partner for Imbler’s heavyweight.

“Wrestling season is pretty hectic with the other responsibilities, but I love them both,” he noted. “I believe the jobs help me connect with the kids. I have two invaluable assets: my wife, Patty, who goes with me to every wrestling event; and a great assistant, Ron Osterloh, who does so much more than just coach.”

Thirteen teams headed to Santiam Christian on Saturday for the Screamin’ Eagle. La Pine, the No. 1 team in the most recent 3A OSAAtoday Coaches Poll, won the event with 276 points. Culver, the No. 1 team in the most recent 2A/1A OSAAtoday Coaches Poll, placed second, scoring 203 points…La Pine had five individual champions:  Tyson Flack, Landyn Philpott, Dylan Mann, Garret Forbes and Landen Roggenkamp...Culver had two champions: Debren Sanabria and Wylie Johnson, along with four second-place finishers…The two small-school powers only had wrestlers meet in the finals twice, at 106 and 113 pounds. Flack, who won at 106 over Culver freshman Cole Rahi, is a junior, the defending champion in 3A and is undefeated against 3A competition this year. Sanabria, who won at 113 over La Pine freshman Riley Flack, is also a junior, was runner up in 2A/1A last spring and has just one loss in his own classification this year…

Roosevelt head coach Justin Hollinghead started a fun new tradition. Covid has not been kind to the program. The Roughriders were shut down for over a month! To add a little fun to this crazy season, Hollingshead got his team long, long socks, each with different designs. There were pigs, dinosaurs, caution tape…The team had a Thursday dual and competed in a dual tournament on Saturday and the socks, looking on point, were a hit! They helped the team go 1-1 on Thursday and finish fourth on Saturday!

In this recurring category, we asked high school coaches to tell us about wrestlers who rallied from deficits of six or more points to pin their opponents. We only have two submissions so far.

﻿This and all others are recurring categories. If you have a wrestler who should be on any list, please let us known by contacting John Tawa at [email protected]