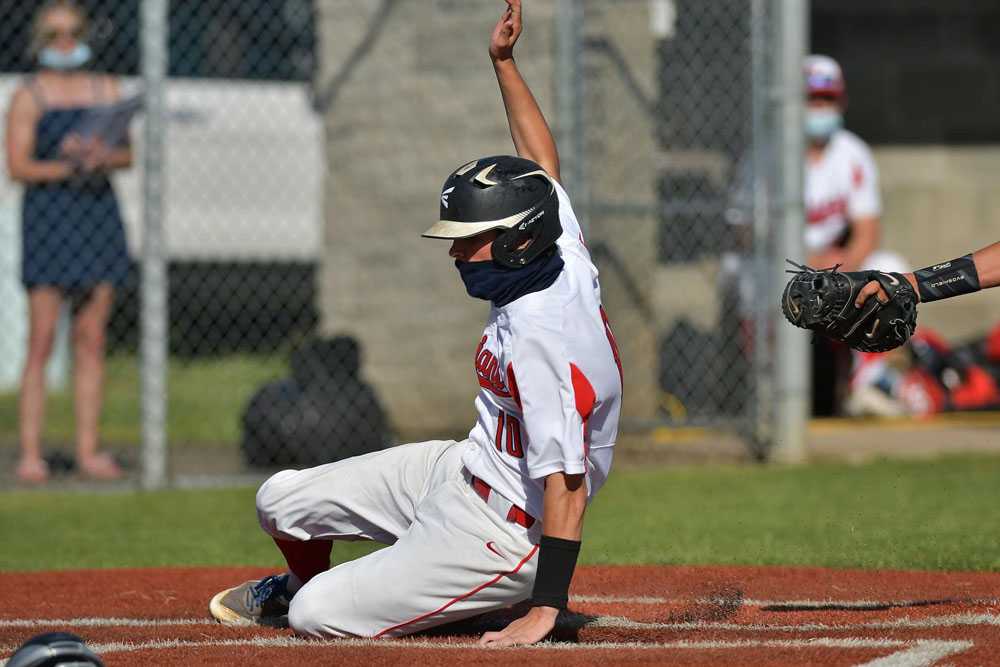 Dylan Kleinschmit touches home plate, something no league opponent has been able to do with the Kennedy hurler on the mound

Kennedy improved to 14-0 on the season with identical 11-1 sweeps of previously-unbeaten Culver in Wednesday 2A/1A baseball action. The Trojans have now won 12 of their 14 games by 10 runs or more.

Culver, 5-0 going into the game, was coming off of an almost-three-week COVID pause. The rust was evident, Moffatt said. The 150-mile journey west didn’t help, either.

Senior Dylan Kleinschmit dominated Bulldog bats in the opener. He struck out 10 in four innings on the mound. Kleinschmit has yet to give up a run in Tri-River Conference action this season.

The second game featured strong work from Riley Cantu, both on the bump and at the dish. The junior started and went three innings, striking out five. He also was 3-for-4 at the plate with three runs driven in. Biegel and Traeger also stayed hot, combining for four hits and five RBIs.

Kennedy has one more game, Saturday versus 10-2 Umpqua Valley Christian, before the 2A/1A tournament during the culminating week. It’s a rematch of the 2019 state championship game, which UVC won, 10-5.

Both Kennedy and Umpqua Valley Christian figure prominently in next week’s tournament, which will include 16 of the division’s 54 teams, the first two finishers in each league, plus two at-large entrants. Other teams that should contend include Heppner / Ione, Lakeview, Monroe, Toledo, Glide, Portland Christian, Knappa and Western Christian. That group has combined to win 11 of the past 14 2A/1A state titles.

Moffatt, who also is Kennedy’s athletic director, said that all eligible teams have committed to participate in the event, which will feature eight, geographically-friendly games on Tuesday, with the winners advancing to play four loser-out games on Thursday. (There also will be a consolation round for the teams that lose on Tuesday). The final four teams will each play two games on Saturday to determine the final 2A/1A finish 1 through 4.