Volleyball: Sisters takes Summit down a notch
Tweet
The 4A Outlaws make a statement in OSAAtoday’s Larger Schools Game of the Week
March 23, 2021 by John Tawa, OSAAtoday 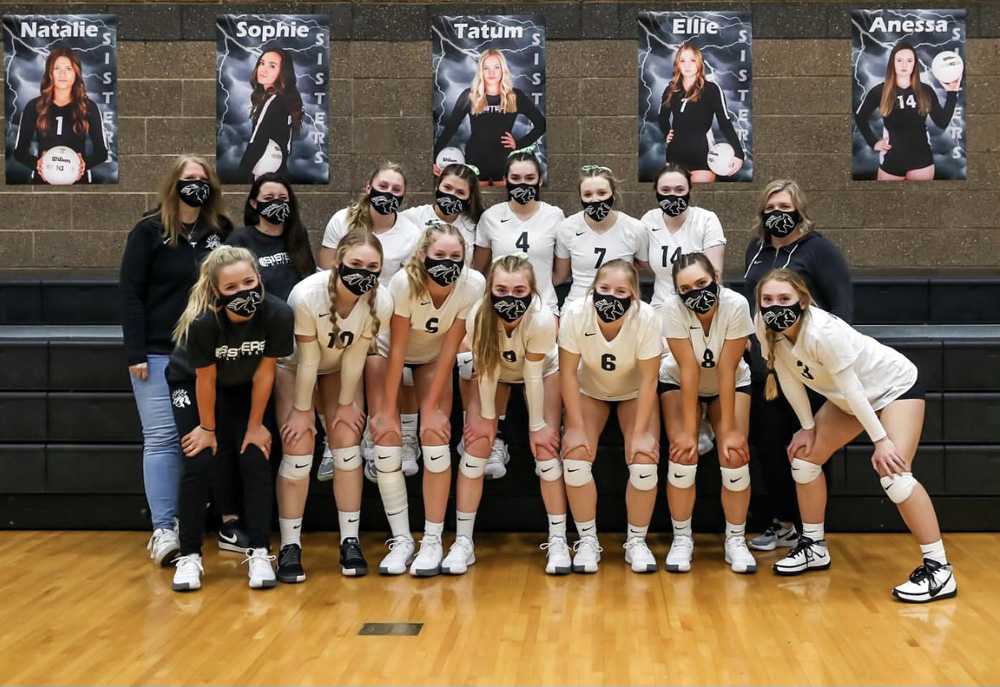 Sisters won its seventh match in a row last night, toppling 6A Summit in four sets

Sisters HS defeated Summit HS, 25-18, 25-10, 20-25, 25-19, on Monday in a battle between two of Central Oregon’s top teams. Ellie Rush set a fast offense that relied on the hitting prowess of Greta Davis and Sophie Silva to send the 4A Outlaws past the 6A Storm for their eighth win in nine starts during this COVID-shortened season.

“We won because we didn’t allow them to get into their system or allow their strong hitters to get into a rhythm,” said Sisters head coach Rory Rush. “We were able to make them struggle with passing, keeping balls off the net, and then, when they did attack, we were able to put up a strong block and played great defense.

A glance at the volleyball roster at Sisters HS reveals one thing: a glaring lack of height. Only one player is taller than 5-9; only two are taller than 5-7. That’s hardly ideal to be one of the elite teams in 4A.

The roster at 6A Summit tells a completely different story. Six players are taller than 5-9, including setter Kate Doorn, who stands 5-11.  Both middle blockers are well over 6-0; the outsides just a tick under.

On paper, and during warm ups before Monday’s match at Sisters, Summit’s height advantage seemed like an insurmountable obstacle for the home team.

If Summit didn’t have any pedigree, the height discrepancy might have been easy to overcome. Sisters, after all, is a team filled with capable, athletic volleyball players. The Outlaws won 4A titles three times in the past decade, finished fourth in 2019 and were 7-1 coming into the match.

But Summit, under head coach Jill Waskom, also is a powerhouse. The Storm have won two 5A state titles this past decade, finished runner up in 2017 and were 5-1 to start the year after placing sixth in 6A in 2019.

Both Sisters and Summit entered the match having only been broken by 6A Bend during the 2021 winter/spring season. Sisters’ match with Summit was its fifth against schools in larger classifications since the season began March 1 and included a win over 2019 5A state champion Ridgeview.

In Rush’s first year in 2017, Summit and Sisters played in a regular-season match, with Summit winning in four sets. The past two seasons, the squads have split matches in pre-season jamborees.

“It has been a fun rivalry for us since I came four years ago,” she said. “Many of our girls play together during the club season and enjoy competing against each other.”

Sisters started the 7 p.m. match with a rush. From the first swing, it was evident that Summit’s height advantage alone would not carry the day; the Storm would have to execute to mollify a Sisters team with great athletic prowess and grit.

“Our team is very athletic and has worked very hard during the off season to become stronger,” Rush explained. “We have players in each rotation we can count on to put the ball down. When we are playing together we are able to play great volleyball.”

Davis, who finished with 26 kills, was a catalyst all match for Sisters. A junior outside hitter with easy rise and thunder in her right arm, Davis scored from everywhere over the first two sets. On the left side, she beat the block with speed, hit around the block with vision or used the block to tool or go high hands. A former middle, she and Rush connected several times on a 2-ball set and out of the pipe in the back row. Davis also was a menace behind the service line, going on a serving run early in the first set that set the tone. Whatever she did struck gold, because she could not be stopped. As a result, Sisters quickly and decisively captured the first two sets.

Summit turned things around in Game 3. After yielding the first two points to Sisters, courtesy of a Silva kill and block, Summit scored six of the next seven, sparked by 6-2 senior middle blocker Harper Justema. The Columbia University recruit scored on the slide and in front of the setter, and added a massive block. Each time, she celebrated with a swing of the fist that told her team, “Let’s gooooooo!”

Justema’s teammates responded with their best play of the night. OH Taylor Brickey had three kills, a block and an ace as the Storm extended their lead to 11-7. Silva did her part, with three kills, to keep Sisters in the set but ramped up defense, at the net from Justema and in the back row from libero Emily King, proved too tough to overcome. When Ellie Goodrich scored for Summit, the Storm led, 22-13.

Sisters did not go quietly into a fourth set, however. A Natalie Sitz tip produced a side out and Anessa Stotts followed with four service points in a row, including successive aces, to get Sisters within 22-18. A strong pass from King and a termination from Shannon MacCallum helped quell the rally. Late kills from Doorn and Justema and continued exceptional defense from King completed the 25-20 win.

Justema and Summit continued their spirited play into the opening moments of Game 4. Justema scored twice, as did MacCallum, in a 4-2 start. The momentum of the match told a clear story: this was going five.

Sisters, however, wasn’t interested in that story. Tied at 11-11, Silva made a great adjustment to put a ball down, Sitz followed with an ace and Davis scored off the block to put the Outlaws up three. Summit, whose ball control troubles stifled Justema’s effectiveness, called two time outs during this stretch but could not blunt Sisters’ momentum. Four Davis kills and a soul crushing ace from Sydney Myhre, which dribbled off the net and down; extended the Outlaws’ lead to 20-13. Sisters would soon go up, 24-14, earning 10 match points in which to quell the Storm.

Summit, to its credit, fought to the end. A Goodrich kill, two Brickey aces, Doorn knuckler and a line shot from MacCallum forced Rush to call time out with her team’s lead whittled to just five.

Alas, a comeback of epic proportions was not in the cards for Summit. The Storm committed a hitting error out of the time out, clinching the home win for Sisters.

Silva and Sitz combined for 22 kills to complement Davis’ 26 for Sisters. Ellie Rush finished with 37 assists and was in complete control the entire match.

Rush said that beating a school like Summit, with its history of success and being two classifications larger, was important for her program.

"While many of these players compete together and against each other in club on an equal footing in the offseason, I feel it is always significant when a smaller classification beats a larger classification,” Rush explained. “At some point records go to the wayside and pride of your classification takes over during the contest. Summit is a fantastic program that has competed at an extremely high level over recent years. We have the utmost respect for their program. So to be able to compete hard tonight and come away with a win is a great building block for this unique and challenging shortened season. We take great pride in playing larger schools each year as a sharpening tool to ready us for our tough league schedule. Tonight was an important step in our growth as a team."