Football: 'Underdog' Sunset smothers Mountainside 20-0
Tweet
The physical Apollos arrive with a chip on their shoulder and stymie the Mavericks for their second consecutive shutout
March 12, 2021 by Jerry Ulmer, OSAAtoday 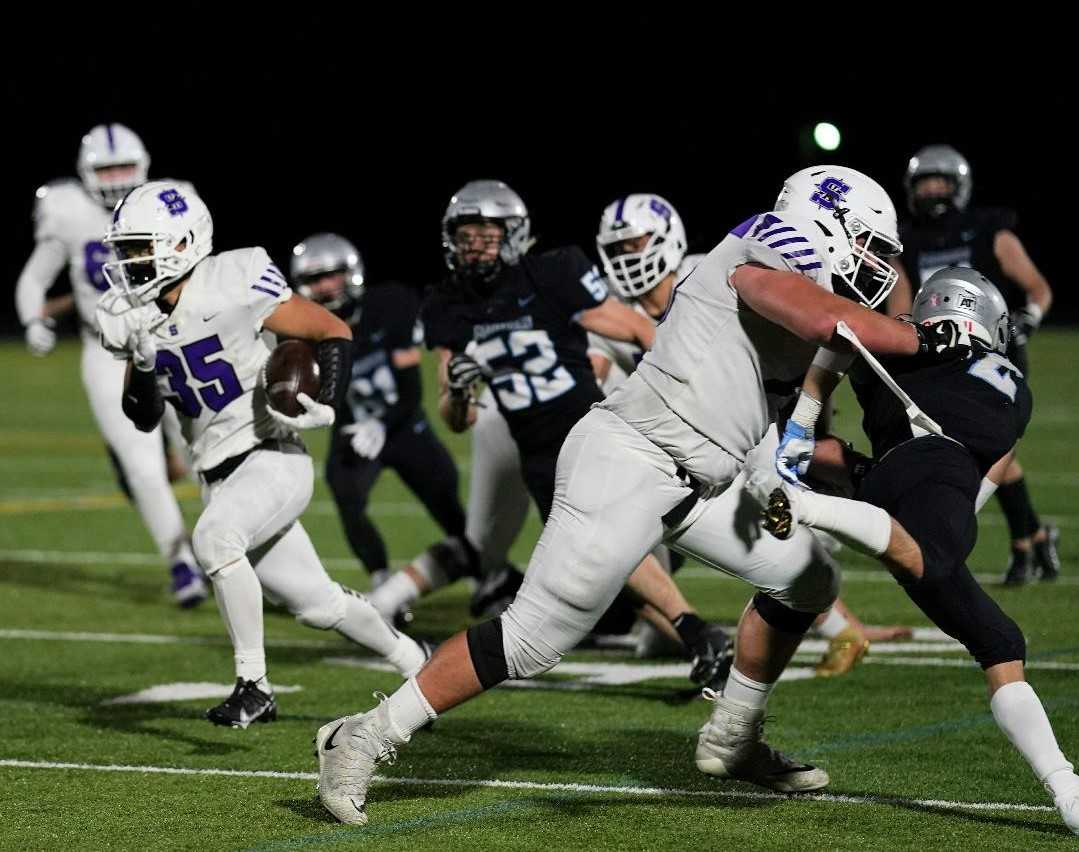 BEAVERTON – The Sunset Apollos have heard all about how Mountainside is the up and coming program in Metro League football.

So when they arrived at Mountainside on Friday night for the first-ever varsity game between the teams, they were feeling a little salty.

“I heard some stuff that we were the underdogs, and that got my blood pumping, and I was kind of mad,” Sunset junior running back and linebacker Caleb Kim said. “Our guys, we knew we could beat them. When we have a chip on our shoulder, we rise to the occasion.”

The Apollos (2-0) dominated with their physical play all night, driving 65 yards for a touchdown on their first possession and riding a stifling defense to a 20-0 win over the Mavericks (1-1). It was the second consecutive shutout for Sunset, which throttled Sandy 40-0 in its opener.

The game was much different than a 7-on-7 meeting last fall when Apollos coach Damien Merrick said the Mavericks, 6A quarterfinalists in 2019, “made us look bad.”

“We talked about it all week that this game's not going to be won and lost based on 7-on-7,” Merrick said. “It was going to be about who was more physical. And not just up front, not just the line kids. I think our kids took that to heart.”

The Mavericks never got inside the red zone as Sunset held them to 134 total yards, including minus-1 rushing. The Apollos had six sacks, 2 ½ by senior linebacker Connor Stevens, who also had a fumble recovery. Senior Nic Janati had an interception for the second week in a row.

Mountainside junior quarterback Brian Mannion, who threw for 210 yards and two touchdowns in a 49-7 win over Beaverton last week, couldn't get comfortable as the Apollos attacked in waves. He finished 17 of 34 for 135 yards and one interception.

“We were definitely physical,” said the 6-foot-3, 221-pound Stevens, a Metro first-team pick as a junior. “We were ready to come and play and hit them in the mouth early. I think they underestimated us, and I think that showed.”

Merrick sensed his team entered the game with an attitude. The Apollos didn't have any fans in the stands – unlike Mountainside, which had a limited contingent – but their sideline made up for it with steady patter throughout the game.

“During the week, you could hear them talking,” Merrick said. “I said, 'You guys, this is exactly what you want. You want the other guys and other people to think you're the underdog, and you are until you prove them wrong.' Mountainside had a great season last year, and they're a good program. So I think they felt like they had a little something to prove.”

Sunset's offense also strained to move the ball, finishing with 144 total yards. But Kim, who ran for 146 yards and two touchdowns in the opener, was steady again, racking up 86 yards and two scores on 18 carries.

Kim scored on a three-yard run to make it 7-0 and added a one-yard touchdown run on the final play of the first half, sending Sunset to the locker room with a 13-0 lead. The second score was set up by a Stevens fumble recovery at the Mountainside 47-yard line.

The Apollos pushed the lead to 20-0 early in the fourth quarter on a six-yard touchdown pass from senior Kyle Jaekel to junior Kaeden Ball, effectively sealing the deal.

Jaekel, who threw for five touchdowns in the opener, completed 10 of 12 passes for 58 yards and one score. He was sacked six times, including three by senior Breyton Whitehead and two by senior David Cho.

Mountainside's best chance to score came on its first possession of the second half when it had a first down at the Sunset 30. On fourth-and-four, Mountainside senior Sammy Cohen caught a pass in the flat but Apollos junior Chase Limbocker stymied him at the Sunset 23, three yards short of the first down.

“They're very strong, very physical up front,” Mountainside coach John Mannion said of the Apollos. “That was just hard to contend with. It was choppy putting things together because we had a hard time handling them up front. Certainly, we've got a lot of young linemen, and it was a learning experience.”

It seemed every time the Mavericks pushed forward, Sunset pushed them back.

“We just couldn't get a rhythm,” John Mannion said. “We did at times, which was good, but sustaining it was difficult. They put a lot of pressure on us up front.”

In addition to Stevens, the Apollos got 1 ½ sacks each from Liam Brown, a 6-6, 315-pound senior lineman, and junior Padraig Owens. Janati and senior defensive back Nick Molitor had big plays in run support.

“Defense, this year we came out and had a motto, just be hard hitters,” Kim said. “Everything we do from the start, we hit hard. That's what we did today.”

Sunset held Mountainside senior running back EJ Broussard to 25 yards on 12 carries. Senior Andrew Simpson caught six passes for 43 yards and senior Justin Hughes had five catches for 46 yards for the Mavericks, but could not break a a big play.

“He was under fire a lot of the night,” John Mannion said. “We had some throws we missed. He's a young quarterback, still growing. Certainly we can play better as a team.”

Brian Mannion looked ahead to next week.

“We're ready to bounce back against Southridge,” he said. “I want to get back out to practice Monday and get ready.”