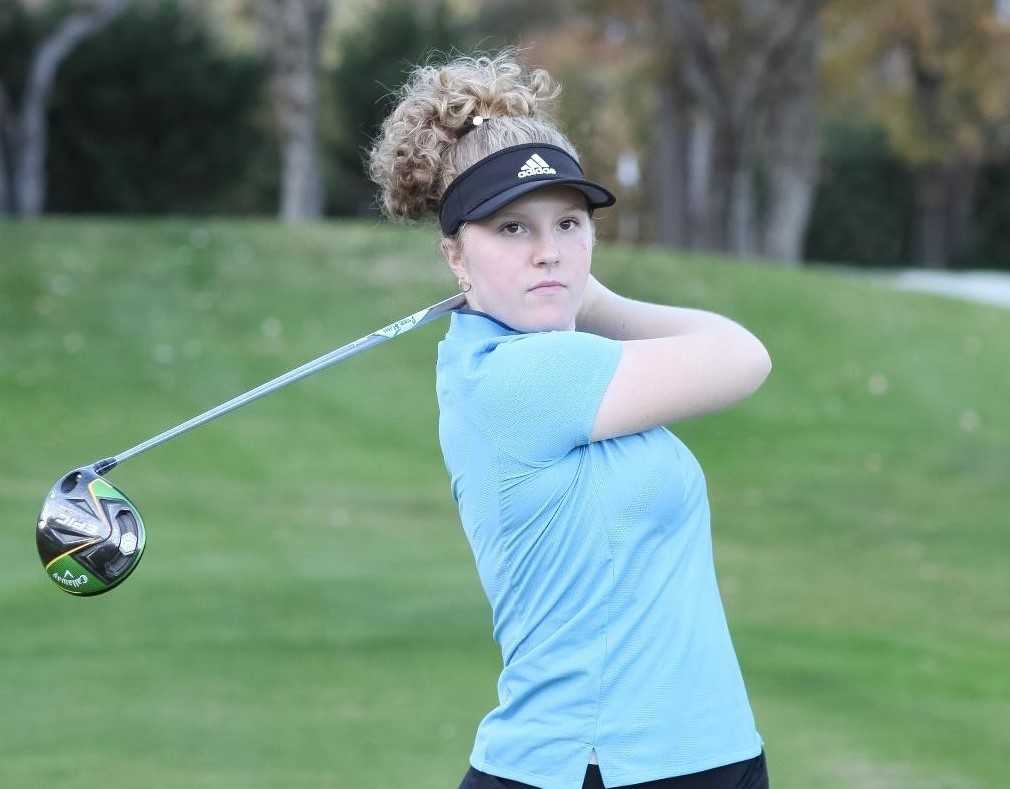 Baylee Hammericksen shot a tournament-record 5-under par to repeat as 4A/3A/2A/1A champion in 2019.

Baylee Hammericksen was putting in work at the driving range last March when she finally received the news that she was dreading.

Her junior golf season was canceled due to the COVID-19 crisis, wiping out her goal of being a four-time state champion, something only Summit's Madison Odiorne (2012-15) has done.

“It was crushing,” said Hammericksen, now a senior at St. Mary's of Medford. “I'm out there practicing with the state championship in mind, and it was just a moment of, 'Oh, you've got to be kidding me.' It was so disappointing because I wanted it so badly.”

As it turns out, though, the past year has been far from a total loss for Hammericksen. Not only was she able to make marked improvements on her game and win some junior tournaments, but she secured her college golf future by signing with Oregon.

When the 5-foot-8 Hammericksen last appeared on the high school stage in 2019, she was setting a 4A/3A/2A/1A tournament record by shooting 5-under to repeat as state champion. The previous record of 4-under was set in 2013 by Reedsport's Monica Vaughn, now an assistant coach at Oregon.

The performance not only helped lead St. Mary's to a fourth consecutive state title, it showed the competitive mettle of Hammericksen. She withstood a stern challenge on the second day from Riverdale's Yvonne Vinceri, who rallied from seven shots behind to within one with eight holes remaining.

“When that happens, your mind starts to enter a panic,” Hammericksen said. “The trap a lot of players can fall into is, 'OK, I'll try to hit this crazy shot to see if I can make a birdie happen.'

“I was able to take a step back and look at it, take a breath, slow down, and realize that I can stay in my own game. That was the biggest thing I took from the state tournament, more than any trophy or any score, just learning the importance of that lesson.”

“It just showed me what kind of competitive cognitive ability she has to really buck up and do well,” Klabunde said. “Baylee just hung in there and stuck to her gameplan and continued to play well. She pulled away, and made some great shots down the stretch.”

In the summer of 2019, Hammericksen got a chance to test herself against national-caliber competition. She finished ninth at the inaugural NHSGA High School Golf National Invitational in Florida and but missed the cut in the Girls Junior PGA Championship in Connecticut.

“The biggest thing that separated my game from the girls at the top of the leader board was length, especially length off the tee,” she said. “After that summer, I spent the fall and winter really dedicating myself to strength training. That made a huge difference. Coming out that next spring, I was at least 20 yards longer.”

It was an example of how serious Hammericksen is about golf.

“Baylee is definitely the most dedicated golfer I've ever had,” Klabunde said. “She has tunnel vision. She wants to do well, and there's nothing that's going to stop that.”

Hammericksen and her sister Riley, a 6-foot junior who finished third at state as a freshman, were able to keep working on their games throughout 2020 as junior members at Rogue Valley Country Club and frequent players at Centennial Golf Club.

“There was really no break for me,” Baylee said. “I was able to continue improving and practicing. I definitely would say that my game is where I'd like it to be.”

She also finished second in the Southern Oregon Junior Golf Championship, finishing two strokes behind Vinceri, and was runner-up in the OGA Public Links Championship, one stroke behind former Tigard standout Victoria Gailey.

One of the highlights of the year came in June when she was matched up against Vaughn, her future coach, in the Oregon Women's Stroke Play Championship at Riverside Golf and Country Club in Portland. She was tied with Vaughn for the lead going into the last hole but lost by one stroke, sharing second place with Gailey.

“It was a crazy experience,” Hammericksen said. “No better way to get to know your coach than to spend the whole day, playing 18 holes with them.”

Hammericksen began sending out emails to colleges in the fall of 2019. To her surprise, Ducks coach Derek Radley was the first to respond, and it led to an offer, which she accepted in November 2019.

“University of Oregon was actually one of those it was like, 'Oh, I don't know if I'll hear back from them, but I'll take a shot. What could go wrong?'” she said. “I know they're in the Pac-12, and they recruit girls from all over the world.

“He just seemed so excited. It was not what I was expecting at all, but it was the best surprise ever. It was like, 'He actually knows me.' It was a fun, like fangirl, moment.”

Baylee credits Riley for helping her stay grounded. She said Riley's impact on her has been “monumental.”

“Even though she's my younger sister, she's a huge role model for me,” Baylee said. “She's patient and kind and giving. She has so many positive attributes. I tend to be a little headstrong, a little impatient, a little stubborn.

“So especially on the golf course, when that can rear its head, she's been a great teacher to show me how to battle that and look to see the positive in things. Take that breath and slow things down, so that even when I'm hitting bad shots, I can get my mental game back on track.”

Klabunde said that Baylee has a more intense approach than Riley.

“Riley is just out there to have a good time,” Klabunde said. “She's taller than Baylee, and she hits it longer than Baylee. I think that difference in swing speed and distance off the tee really motivated Baylee to increase her distance, too.”

The sisters have a valuable resource in their father, Jamie, the boys golf coach at South Medford.

“He doesn't really get involved unless I ask,” Baylee said. “But he's so knowledgeable that I can't help but try and absorb as much as I can from him.”

Looking ahead, Baylee seeks to end her high school career on a high note with individual and team titles. Beyond that, big challenges await at Oregon.

“I always said that college-wise, my goal is to win a team national championship,” she said. “That's my big college goal. I try not to get too result-oriented, and really focus on the process of getting there.”