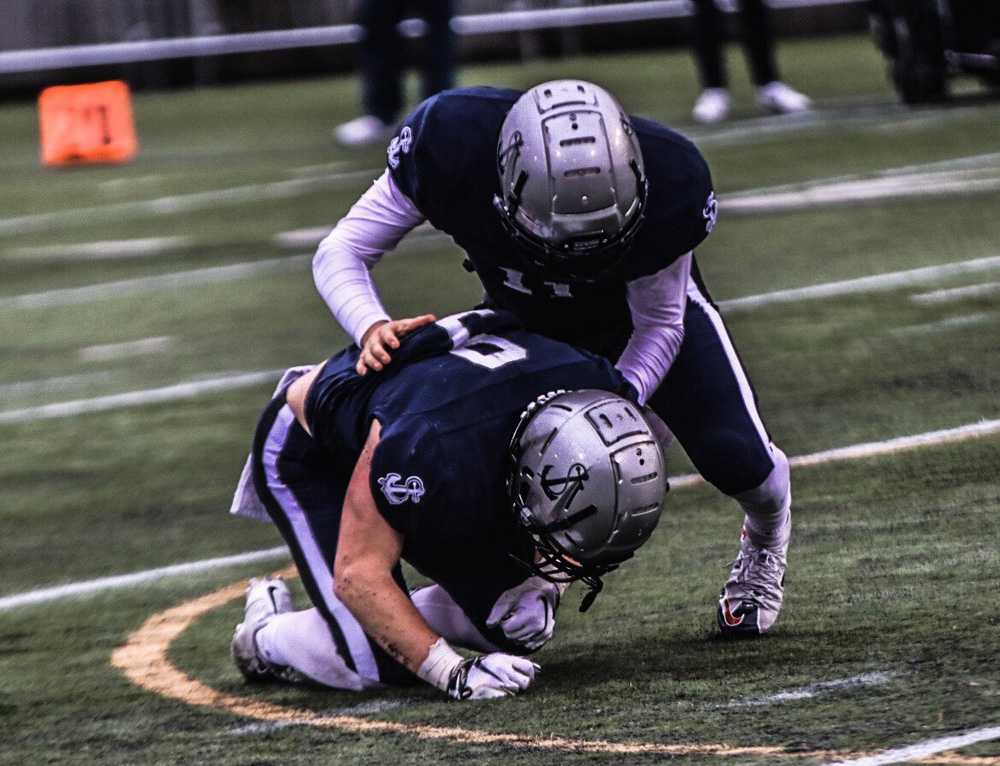 Casey Filkins had many great moments during his four-year career at LO. This was the best. Photo by Isaiah Kerlegan

As yells, screeches, and anticipation swirled about like a tornado, the ball remained floating. For what felt like five minutes, the ball was lifeless. In that moment, the December afternoon breeze stopped, as if it was holding its breath and witnessing with its own eyes the history being made at Hillsboro Stadium.

After the ball plummeted towards the turf and landed in my buddy Cody’s hands, I knew that we had solidified ourselves as state champions. With ears ringing and tears starting to form, I sought my brothers who had been with me through it all. I met them with an embrace filled with relief, excitement, love, and exhaustion. We had to run one more play; a kneel down.

With the ball placed on the left hash of the twenty-nine yard line, I placed my heels back on the forty. I tried to find the strength to lift my head and watch the last snap of our season, but failed. With my hands on my knees, tears were starting to rush down my face, and my body went numb.

The clock read four zeros, and both of my arms instinctively flew up into the air. I collapsed as if I had run a marathon, and, to put it frankly, started bawling my eyes out. The turf embraced me, like it was congratulating me in its own way, and soon my teammates joined in, until it was a mountain of navy and silver. I couldn’t breathe, and I didn’t care. This is the moment I’d dreamed about my whole life. The dogpile disassembled. I don’t remember anything after that until I saw my dad.

That hug with my dad is something I will take to my grave. The sacrifice, care, and love poured out of us as we stood hugging and crying for minutes. I didn’t want to let go.

That hug wasn’t about the state championship that day. It was about getting up at 5:30 am to go work out with my dad before school. It was all of the food that he forced me to eat every single day. It was the love and support that he had shown all the way since flag football in kindergarten. It was all out there, floating, like the lifeless football moments before.

I hate to admit that I was so caught up with my dad in everything that I missed the damn team photo with the trophy. You can go back and look at any photos, especially the main one in The Oregonian, and you’ll see I’m not there. I have no regrets, though. That moment with my dad was the best moment of my life.

I made my way back through a sea of Laker supporters to my teammates. Hugs, tears, and body odor occupied the area. Moms were crying, grandmas were crying, everyone was crying. It was like nothing I’d ever seen before. It made me realize in that moment just how much this meant to everyone else. I made my way to Coach Coury, who hugged me and told me how much he loved me, with tears streaming down his face.

Finally, I saw the rest of my family along with my girlfriend, Lauren. They had all been there with me from the start, and to see the joy on their faces made me cry even more, and filled me with a sense of pride. Everything in that moment was still. I felt like I was in a fever dream. So much was going on around us; yet, I didn’t think twice about anyone or anything. I was in the moment for possibly the first time in my life.

This was the best moment of my life, and I have a hard time coming up with something that could possibly top it. Beating Jesuit five times in a row is a close second though…

**The best thing I have experienced (so far) in Oregon High School sports is a feature that will run every Friday during summer. Anyone wanting to submit an essay (no more than 600 words; current player or coaches preferred) may email [email protected]. We will publish the 12 best we receive.