Newberg wrestling goes to the mat for healthcare workers
Tweet
The reigning 6A champion Tigers join forces with local restaurants to provide meals for the frontline at Providence Newberg
April 27, 2020 by Jerry Ulmer, OSAAtoday 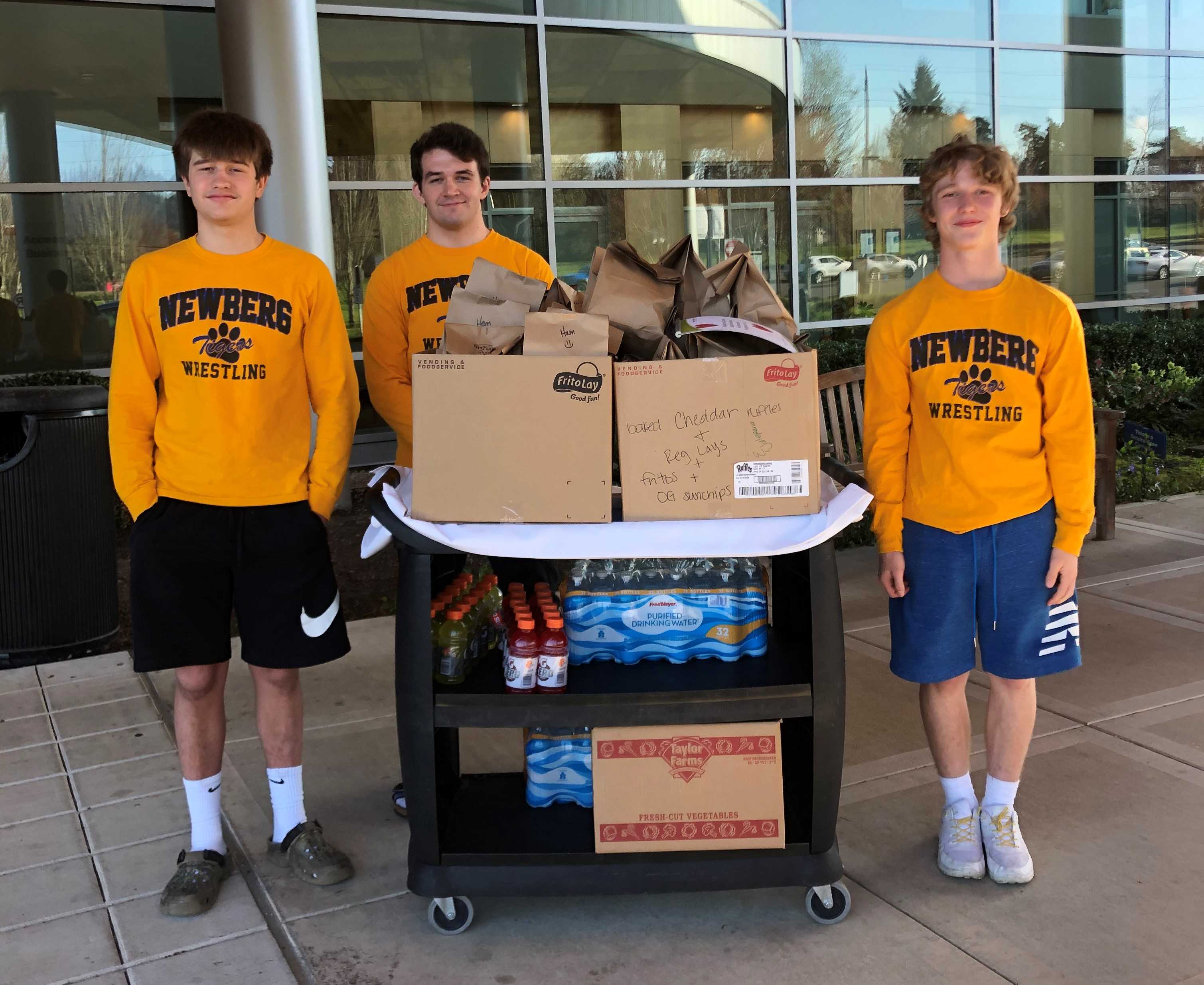 Fresh off winning their first 6A championship in 11 years, Newberg wrestlers continue to deliver in the clutch.

The Tigers have teamed up with local restaurants to turn community donations into meal deliveries for frontline healthcare workers at Providence Newberg Medical Center during the COVID-19 crisis.

Newberg coach Neil Russo said providing support during the crisis is an extension of the values that the program preaches, offering a way to give back to a community “that has been so good to our wrestling people over the years.”

“Every time we need something there's always somebody there to help us get that done,” Russo said. “So it feels really good to be on the other end.”

Don Norman, a longtime officer in the Newberg Mat Club, approached Russo with the idea last month. They encourage families to purchase gift cards from a local restaurant, which uses the donations to provide the meals.

Each week, two or three Newberg wrestlers help bring the meals to the hospital. A staff member meets them in the parking lot and carts the food into the building.

“We're not sending anybody into the hospital,” Russo said. “It would be great if we could get all our wrestling people down there and make a show of it, and really show our appreciation, but we've decided that's not the best idea.”

In the second week, the team's three 2020 state champions – Ayden Garver, Charlie Evans and Hunter James – made the delivery. Others who have participated are Nicky Olmstead, Hayden Hampton, Nolan Womack, Harrison Womack and Kyle Kelley.

“Pretty impressive that a program, who just celebrated winning the 6A state championship, can use the same focus of dedication, sense of responsibility and sense of community to take care of those who are hurting and those who are healing,” Newberg athletic director Tim Burke said. “It's the key to our program's long history of success, both in and out of the wrestling room.”

The Tigers not only are showing appreciation for the healthcare workers, but they also are supporting local businesses.

“We thought, well, maybe this could be a way we could help on both ends,” Russo said. “The restaurant people could provide the meals and maybe keep some staff on that they maybe wouldn't otherwise be able to do. They've all been very supportive of the things we've been doing in this community. Hopefully, we can help them stay afloat.”

The initial joint venture with J's Family Restaurant – a fixture in the community – provided more than $1,000 worth of meals to the healthcare workers. The project has taken off from there, with Sandwich Express, Jem 100 and La Sierra Mexican Grill following suit in successive weeks.

Norman identifies one restaurant each week for donations and schedules the delivery with the hospital.

“Initially the goal was to raise enough money to cover the costs of the food and the expenses that the restaurant were incurring,” Russo said. “But every week we have raised far more than needed to do that, so the restaurants have offered to do it again.

“People were suggesting, 'If you call to give a $20 gift card, why don't you order your family's meal for that night, while you're at it?' That's kind of what's happening.”