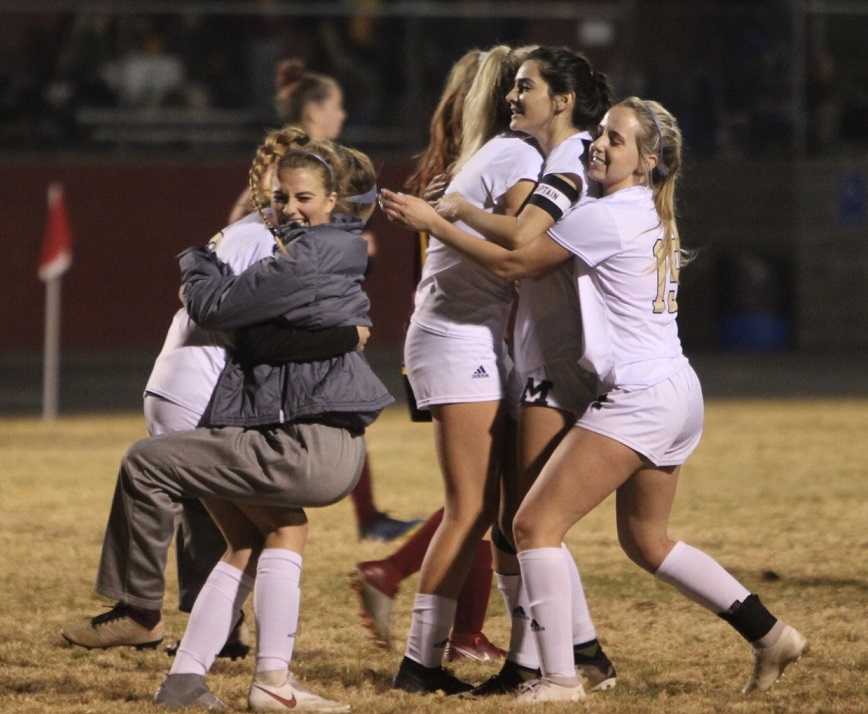 Jesuit 6, West Salem 0: The two-time reigning champion Crusaders broke from a 1-0 halftime lead with five second-half goal to roll over the Titans, who tied them on 0-0 on Sept. 16, the only blemish on their 18-0-1 record. Callan Harrington scored off a corner kick from Taylor Krueger in the first half. Second-half goals came from Krueger, Alison Sasaki, Ella Nelson, Maddie Koleno and Pia Goodell. Koleno had four assists. Goalkeeper Mary Votava recorded the shutout, making a big save in the first half.

Crescent Valley 1, North Eugene 0: Valerie Lending scored in the 33rd minute to lift the reigning state champion Raiders to the win in a hard-fought, gritty battle over the Highlanders, who played the last 14 minutes down one player after a red card. Senior goalkeeper Peyton Dale got the shutout.

Wilsonville 6, Churchill 1: Sophomore Lindsey Antonson scored four goals and Haley Stahl and Renee Lee also found the net for Wilsonville in the win over the Lancers, who started 2-5-1 on the season but were riding an eight-match winning streak into the semifinals.

Woodburn 3, North Marion 1: After a scoreless first half, the Bulldogs scored three consecutive goals to beat the Huskies. Yahaira Rordriguez scored off an assist from Luz Rojas in the 42nd minute. Shortly after, Litzy Gonzalez converted a cross from Cassidy Garibaldo. Myranda Marquez made it 3-0 when she followed a shot by Rojas that was deflected. North Marion’s goal came from Dominique Huapeo.

Marist Catholic 3, North Valley 1: The Spartans got two goals from Abbie Chambers and one goal from Kallie Harding to turn back the Knights. Harding scored off an assist from Reese Fitzpatrick in the fifth minute and Chambers converted a long free kick by Harding to make it 2-0 in the 15th minute. North Valley got a goal to close within 2-1 at half, but Chambers put it away in the 70th minute when she followed a rebound off a 30-yard, left-footed shot by Harding.

Oregon Episcopal 1, St. Mary’s 0: The five-time reigning state champion Aardvarks got a goal from Zoe Strothkamp in the seventh minute and made it hold up for the road win, ousting St. Mary’s from the semifinals for the third year in a row. Sophia Dobry of St. Mary’s nearly tied it in the 55th minute but her shot was cleared off the goal line by defender Grace Armstrong.