Boys soccer: No. 3 Liberty uses painful playoff loss as 'fuel'
Tweet
The upstart Falcons, knocked out in the second round of the 6A playoffs last year, have won their first seven games
September 26, 2019 by Jerry Ulmer, OSAAtoday 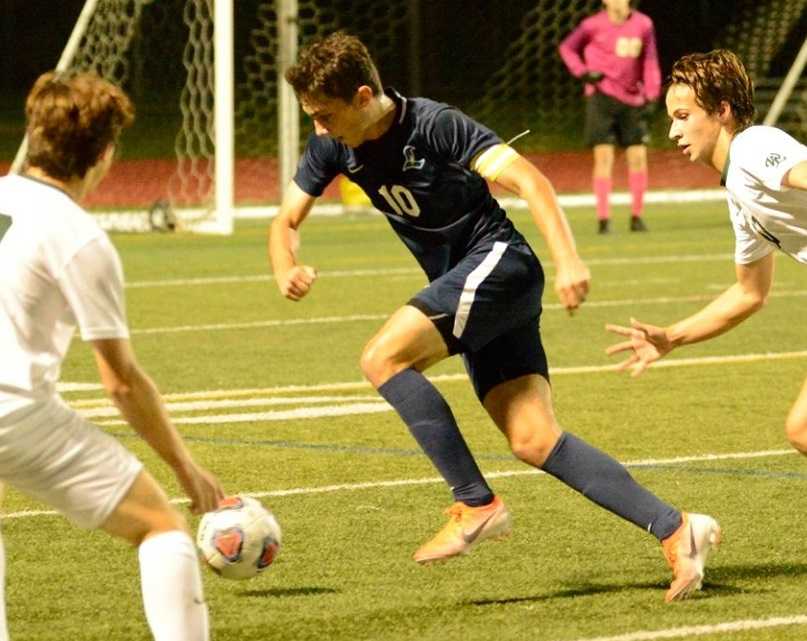 A frustrating exit from last year’s 6A boys soccer playoffs has haunted the Liberty Falcons.

Seeded 18th, the young Falcons believed they were a darkhorse contender, but their playoff run got short-circuited in the second round with a 4-2, overtime loss at second-seeded Summit of Bend.

“I thought we won that game in regulation time, in terms of possession and who outplayed who,” Liberty coach Garrett Blizzard said. “The elevation, the environment, the bus – all the elements that factored into that game – just took a toll on us.”

That loss has helped propel the Falcons into this season. Returning all but two starters, they are off to a 7-0 start, rising to No. 3 in the OSAAtoday 6A coaches poll.

“My expectations for the team were high this year,” Blizzard said. “I’m really proud of the kids for taking a painful situation and using it as fuel for the fire.”

Liberty has been steady from the start of the season behind stellar play from senior center backs Jacob McDaniel and Ian Bermudez.

Senior Rudy Salinas-Solorio, a senior center attacking midfielder who is the team’s emotional leader, and Omario Stewart, a junior wing who moved up from JV late last season to add punch to the offense, also have been consistently effective.

The team showed its resolve in coming from behind to beat Sunset 4-2 on Sept. 5 and West Linn 3-2 on Sept. 19. The Falcons trailed West Linn 2-0 but fought back and got the go-ahead goal from Salinas-Solorio on a free kick with four minutes left, avenging a 3-1 road loss to the Lions last season.

“It was epic,” Blizzard said of the game-winner. “I was very impressed with his shot, and the composure, and the way the whole team managed themselves during that. It was a great moment, a great memory.”

Blizzard, who played at George Fox, is in his eighth season in the program and fourth as head coach. When he took over as coach in 2016, Liberty moved from 5A to the 6A Metro League and finished 1-12-1.

“It was humbling,” said Blizzard, adding that he had learned to win consistently as a JV coach, but on varsity, "just got rocked for a whole season, essentially.”

Blizzard said the most important lesson he learned was the balance between technical coaching and bonding with players by teaching them how to think and make choices on their own.

The relationships he has built with the players has provided a foundation for the team’s success. In 2017, Liberty improved to 8-7 overall and reached the second round of the playoffs. The Falcons went 9-5-2 last season.

The team took another long bus trip to Bend on Wednesday, this time to face Bend. McDaniel scored twice in a 3-1 win, but the result didn’t come without some adversity.

“It was on grass, and we just struggled,” Blizzard said. “Same kind of thing, the bus ride, and all the details. You could just see it. It was humbling for us, but it was good. The confidence from the wins, add a little bit of humility … I think we’re in a really good place.”