Alphabet Stories: Cascade HS
Tweet
When Tim Ganfield interviewed to be basketball coach at Cascade they lobbed him a softball
December 14, 2020 by John Tawa, OSAAtoday 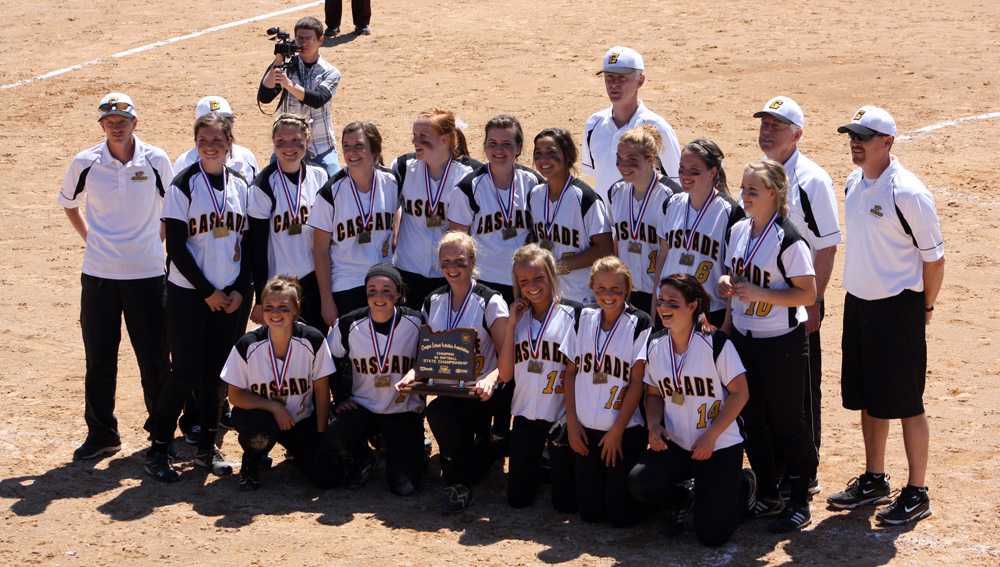 Cascade poses with the trophy after winning first state title in 2010. Tim Ganfield is on the far right, Ivan Simar far left

[Editor’s note: The idea behind “Alphabet Stories” is to write one noteworthy athletics-related story about each OSAA-member school. We started with Adrian HS on Sept.18. Today’s story, almost three months later, is about Cascade HS. The goal will be to write two per week. While we will be relying upon athletic directors to furnish story ideas, anyone may offer suggestions by emailing [email protected]]

Tim Ganfield aspired to be a baseball coach. If not baseball, then definitely basketball.

So how did Ganfield, now the Athletic Director at Cascade HS near Salem, become one of Oregon’s best softball coaches? It’s like this…

Ganfield was an educator down at Myrtle Point, close to Bandon on the southern coast, when he was asked to coach the Bobcats’ junior varsity softball team. Ganfield considered himself a baseball guy, and had interviewed for the varsity baseball coach position, but he decided to give softball a go.

After a two-year stint, Ganfield made the move to Cascade in 1998. He was hired as a Health/PE teacher and really wanted to coach the boys varsity basketball team. The Cougars instead offered Ganfield the softball head coaching job. Cascade had been playing softball since 1985 and had never been to the playoffs. Indeed, the Cougars had never even had a year with a winning record.

He took the job.

With Ganfield at the helm, it took Cascade just one season to reach the playoffs. Five years later, the Cougars were in the 3A softball state championship game. They lost to Taft, 6-0.

The loss didn’t bother Ganfield. He thought just making it to the state final was fantastic. He also had another thought:

He’d be wrong about that.

Ganfield’s daughter, Hannah, was a fifth grader when Cascade first made the state championship game. She was part of a core group of talented athletes who were good in softball from a very young age. Ganfield and many dedicated parents nurtured this group even as he coached his high school team.

“I was involved at all levels,” he said. “I coached a lot of ASA [Amateur Softball Association] and was always a presence. I watched a ton of games. It was important that they saw me supporting what they were doing.”

“Take a breath and look around. You have to realize how cool this is. Soak it in!”

“The keys to success were longevity and consistency,” Ganfield said. “The athletes were there in this district.”

Ganfield also acknowledged having great support, from his wife who acted as team mom, to an “amazing staff” that included pitching coach Ivan Simar, who helped balance Ganfield’s intensity; and Arlo Young, who was one of many who would “just pitch in and help.”

“Those are the kind of people who loved on the girls and made them feel welcome,” Ganfield said.

Ganfield retired after the 2012 season with a record of 265 wins against just 109 losses. His 265 wins currently rank 29th on the state’s all-time list. Only two coaches with 14 or fewer seasons have more.

“Fourteen years was long enough,” he told Jerry Ulmer in a 2012 article posted on OregonLive. “We went to three state title games in a row, and I’m pretty sure it wasn’t going to get any better than that.”

“Softball definitely wasn’t my plan, but it worked out,” Ganfield added recently. “And it let me coach my daughter, which was pretty awesome.”