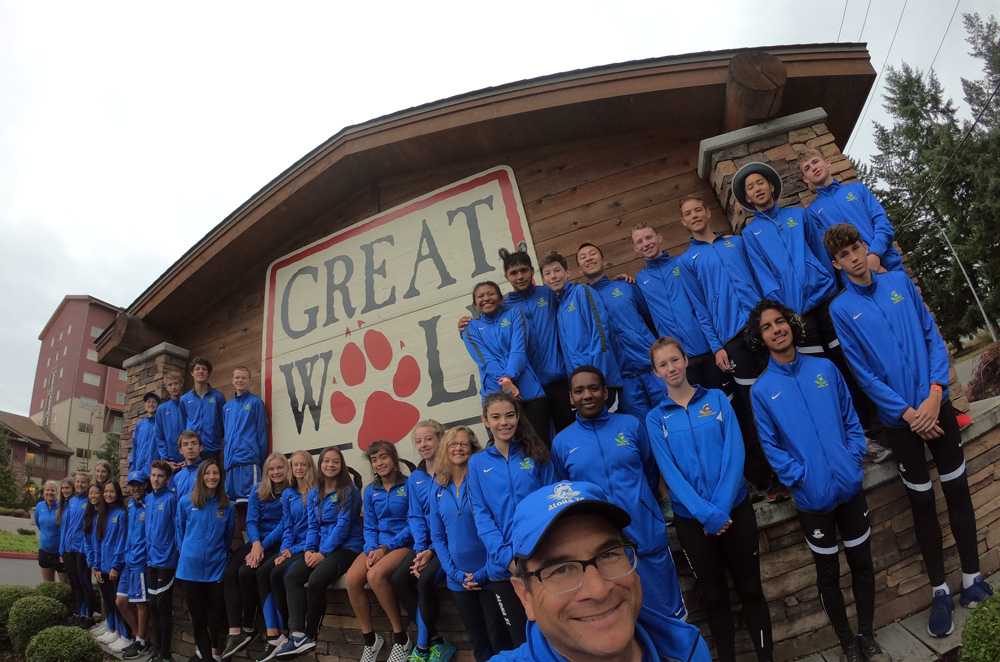 [Editor’s note: The idea behind “Alphabet Stories” is  to write one noteworthy athletics-related story about each OSAA-member school. We started with Adrian HS on Friday. Today’s story is about Aloha HS. The goal will be to write two per week. While we will be relying upon athletic directors to furnish story ideas, anyone may offer suggestions by emailing [email protected]]

Aloha High School has the highest free or reduced price lunch rate in the Metro League, with 70 percent of its student population requiring assistance.

Financial insecurity is a daily way of life for these students.

For more than the past decade, Ken Martinez has been finding a way to help…

Martinez started coaching cross country at Aloha in 1992. He has been a presence in the program ever since, save a three-year break in the early 2000s.  When he took over the program, he asked kids who’d never run before to take a risk by coming out for the team and by committing to working at it to maximize their growth potential.

He makes it easier by working hard himself to guarantee that his cross country runners have an experience similar to all other teams in the Metro. That means warm ups, uniforms, shoes and travel are all taken care of by the program for students who need the help. He sees first-hand how thrilled his charges are when they get a new pair of shoes or travel to a meet by airplane for the first time in their lives…things that are commonplace for athletes in other programs.

“We raise money to have the ability to do all the things other schools in the league can do,” he said. “We mimic what they do. Doing all of those things allows our program to stay competitive.”

The primary fundraising vehicle has been the Nike Portland XC, an annual late-September event that now attracts more than 6,000 competitors from around the country. Martinez said the meet provides an awesome cross country experience for the participants while generating the funds needed to help his own kids.

Putting on the meet is A LOT of work. It started in 1992 with 10 teams but had grown to 80 teams by the time Martinez returned from hiatus to Aloha as an assistant coach in 2005.

“I helped the [Aloha] head coach put it on and saw the work he had to put in,” Martinez said. “When he resigned, I became head coach again. I didn’t know if I could do it. He told me, ‘You could pull the plug and the kids would understand.’”

Martinez thought about the gear, the shoes, the trips and all of the fun things Aloha cross country had been able to do because of Nike Portland.

“So I thought back to the risk I asked the kids to take when I started in the program and decided I was going to take a risk for the kids also. It’s really about providing for the kids.”

Because of COVID-19, the year 2020 has been a challenge for Nike Portland XC. Martinez assumed he’d have to cancel until Athletic.net posed the idea of holding a virtual race. Starting Sept. 23, registered participants have a week to plot out their course and time their run (5,000 meters for high schoolers).

“I just think to try running a race would be a good experience,” Martinez said. “It’s good to get a race in and be part of something. It’s virtual, but at least we’re offering an opportunity for kids.”

It’s just like Martinez to think of the virtual race as an opportunity. Opportunity is something he’s been providing for many years.