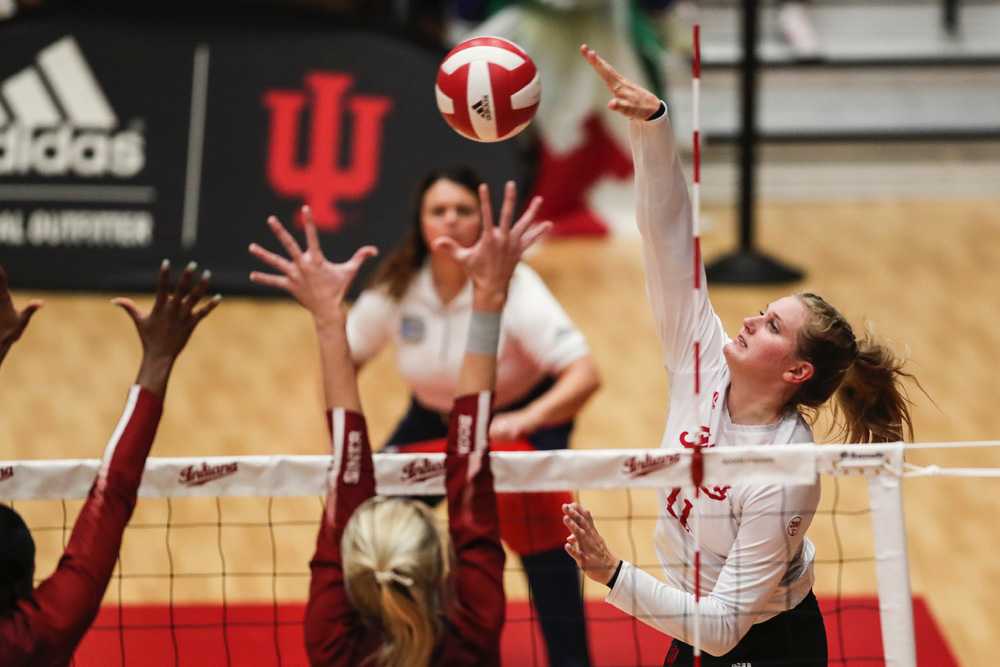 Breana Edwards, shown terminating for IU, has five of the top seven single-match kill totals in OR history. Photo/Missy Minear

Breana Edwards should have been tired.

Just three hours earlier, on that November day in 2017, the senior middle blocker for the Rainier Columbians had taken 116 swings and produced a state-record tying 49 kills in a four-set win over Portland Christian. The victory put Rainier into the 4th/6th match at the OSAA 3A Volleyball State Championship.

The opponent was Salem Academy, a team that had gotten the better of the Columbians in earlier meetings that fall.

“Not this time,” Edwards thought. “I’m going to give it my whole heart. I do not want to walk out of my last high school match without a win.”

Edwards rose to attack 103 times during the five-set marathon. Her final kill, No. 61 on the afternoon, completed Rainier’s come-from-behind win.

In the history of high school volleyball nationally, no schoolgirl has ever had more kills in a single match!

“Win or lose it was a great match,” Edwards said. “It was so competitive! My favorite match over my whole high school career.”

Salem Academy won the first two sets. The Crusaders targeted Edwards with their serves and forced her to do more than just attack. Her legs were heavy and she was wearing down mentally.

She and her teammates could have given up. They weren’t playing for the championship after all.

Instead, they chose to fight.

“There was a switch that flipped,” Edwards recalled. “I remember shouting, ‘Let’s go!’”

“After the first two sets the whole team stepped up,” Edwards said. “The setters gave me amazing sets – best all year – and the passing and defense really picked up as well.”

Rainier won the third set, 25-19. Edwards got every ball. She hit out of the back row, on the left pin, slides behind her setter and some tempo sets. Mostly, the 6-2 masher attacked high balls out of the middle and overpowered defenders by using the whole court.

Salem Academy coach Melissa Holman knew the momentum of the match had changed. The Crusaders came out for the third set too cocky, she said.

“When Breana saw that, she worked harder,” Holman recalled. “She found hope. She was so ON after that!”

Rainier evened the match with a dominating fourth-set win. Edwards already had 49 kills – tying the state record -- with one set yet to be played.

Holman said she was too focused on her squad, which had lost, in her words, its “calm, collected determination,” to appreciate what Edwards was doing.

“You’re trying to save your team with any bit of positivity, information, timing your ‘time outs,’ helping them read the hitter, looking for holes…” she said. “I was just so desperately trying to help them gain their confidence back and fight for the match that I couldn’t really say that I recognized her stats.”

In the fifth set, which was played to 15 points, Edwards used every last ounce of adrenaline to get the Columbians to the finish line. She added 12 more kills and an ace to her stat line, capping her career by swiping an overpass off the block for the match-winning point.

Edwards finished the match with 61 kills, almost 25 percent more than any other player ever in the history of Oregon volleyball. The rest of her team finished with four kills combined on 28 total swings. Edwards, who also had 19 digs, three aces and two solo blocks in the match, truly was a one-player wrecking crew.

Said Holman: “Ask anyone. Every set went to Breana and even though you knew it was going to her, when she was on, she was on.

“We all knew she earned it. We were amazed by her.”

“I just remember the feeling,” Edwards said. “Just getting fourth was enough at that time; a big accomplishment for our program.”

At the time, no one knew that Edwards had matched the national kills record, set in 1999 by Californian Katie Wilkins. Edwards herself did not know she’d even set a state record until her mother went to the state championships the following year and saw Edwards’ feat listed in the program.

Unfortunately, the OSAA did not stat that match and there may no longer be video evidence to support what Edwards did that day.  Edwards may never officially share the national record but the idea of it is “pretty awesome,” she said.

“Being from a small school in Oregon I never thought I’d have any shot at any type of national record,” she added.

Edwards has continued to break records since leaving high school. Last fall, as a sophomore playing for Indiana University, she had 39 kills in a loss to Maryland. The total broke the Hoosier single-match record, which had stood for 21 years!

We asked Oregon coaches whether they felt 61 kills was an unbreakable record.

“Records are made to be broken,” said John Kertchem of Delphian. “12-13 kills per game in a tight 5-game match with extended overtime scores is doable! It would be awesome to see a player in the zone like that!”

Wilsonville coach Nathan Blankenship wasn’t so sure anyone would be able to eclipse 61 kills. He compared it to summiting Everest.

“The record is likely to stand for a VERY long time!” he predicted.  “At least until another Sir Edmund ‘Breana’ Hillary comes along!”

*This is the first in a summer series…Mondays…